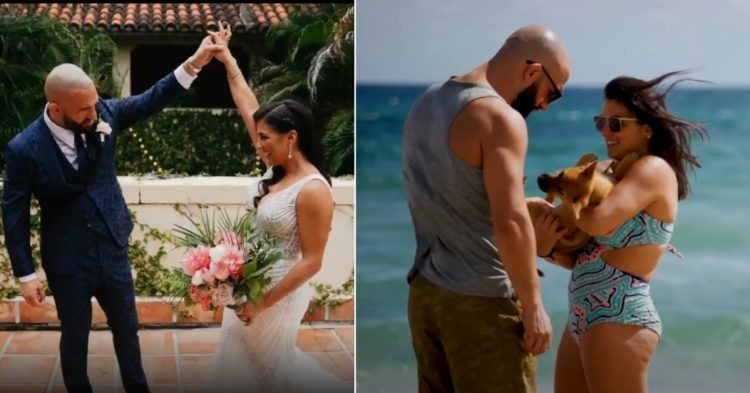 Jared Gordon’s tale of love, freedom and fighting has been nothing less than inspiring. Gordon competes in the UFC’s lightweight division, however, his biggest fight has been the ones outside of it. Gordon‘s struggle with drug addiction has seen him knocking on death’s door. Not once, but multiple times. His addiction has cost him his early twenties, relationships, families, and at one point even his then-girlfriend-now-wife Christina Gambino.

“I tried to make amends. Do what I can to repair relationships. And I have done a really good job. Parents trust me again, my brothers trust me, my friends trust me again and I got Christina back who left me because of my addiction.” Gordon said during the UFC 282 Countdown.

The UFC lightweight has triumphed over multiple setbacks both inside and outside of the cage to emerge as a true champion in the eyes of those who know him and have followed him in his tumultuous mixed martial arts journey.

Jared Gordon and his wife Christina Gordon married in 2021

Jared Gordon and Christina Gordon tied the knot on October 29, 2021. “My wife Christian has been there for me a lot.” Gordon reveals, “She knows exactly what I deal with, she’s my rock and my number one.”

Gordon was just 19 years old when he found himself addicted to painkillers for the first time. Battling an injury, Gordon sought comfort in medicines, but when he turned 21, his addiction moved toward heroin.

Things weren’t easy for Jared and Christina. After brutal TKO Doctor Stoppage loss against Jeff Lentz left him with a broken orbital bone in five places, Gordon found himself addicted to painkillers. The third overdose which happened sometime around 2015 left Gordon legally dead for two minutes. That was the last time that Gordon found himself in any such scenario, and years removed from that incident, Gordon is now clean and is a huge name in the world of mixed martial arts.

Today, Jared and Christina lead a happy life. The duo never fails to express their love for each other on social media. While Jared continues to climb the success ladder in the UFC, Christina is a parkour artist and coaches young kids. Gordon credits Christina for all she has done for him in his battle with addiction and the duo complement each other in all ways possible.