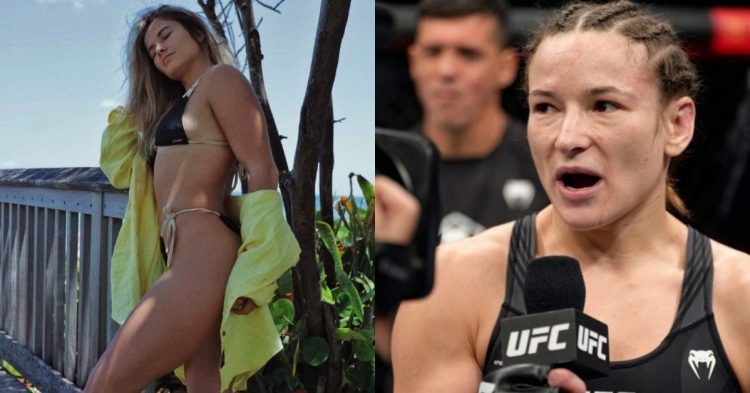 Maryna Moroz is making her debut as a Playboy model! The UFC flyweight fighter, who has done modelling jobs before in her career, will get the chance to associate with such an illustrious brand as Playboy. The Ukrainian fighter took to her social media account to announce the exciting news to her fans.

Nicknamed the ‘Iron Lady,’ Maryna will become the first UFC fighter ever to be modelling for Playboy. Although UFC ring girls like Arianny Celeste and Brittney Palmer have posed for Playboy previously; Moroz is the first fighter to have posed for the famed magazine. It is obviously a great opportunity for her to earn more money and set up a career out of fighting as well.

🚨Announcement🚨 Happy to announce that I’ll be the first UFC Fighter on Playboy Centerfold 🐰! Can’t wait to partner up with such an iconic brand with clothing, activations, and now the platform that has all my exclusive content 🍑” Link In Bio!! @plbycenterfold @playboy pic.twitter.com/JSw1Tw6Nxr

The 31-year-old made her UFC debut in 2015. Over the years, Moroz has a record of 6-3 in the company. She defeated Joanne Calderwood via submission on her debut for the UFC. Although she lost to the current strawweight champ Carla Esparza and Angela hill in back-to-back fights, she is currently on a 3-fight win streak. Maryna will face Jennifer Maia in November this year.

Fans react to the news of Maryna Moroz joining Playboy

In the last 5 years, Maryna Moroz has not been the most active fighter in the UFC. She has only fought 5 times in that period of time. It gave Moroz the time to focus on her modelling career. It has paid off big time as she has bagged a lot of endorsement deals in the meanwhile. The Playboy deal is the cherry on top of the cake.

Underneath the Twitter post, fans seem to have shared their appreciation for the fighter. People congratulated her on being the first active female fighter in the UFC to become a Playboy model. Female wrestlers in pro wrestling have a history of being associated with Playboy. Hence, Maryna has just created history by becoming the first MMA fight to do so.

need this is a poster 🫶

What are your thoughts on the news? Let us know in the comments down below.