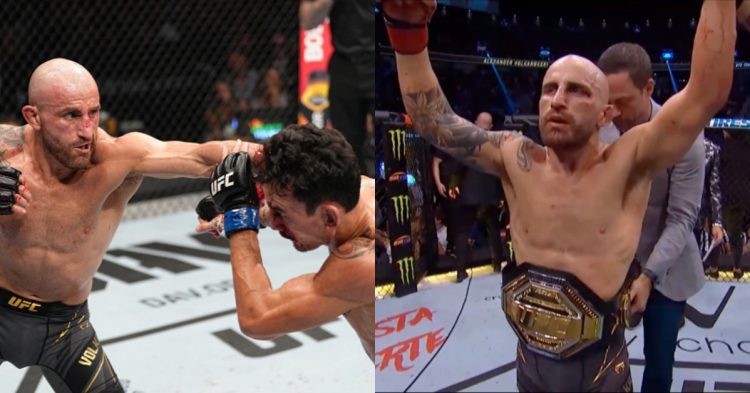 UFC Featherweight Champion Alexander Volkanovski vs Max Holloway 3 took place in the co-main event of UFC 276. Volkanovski led the trilogy by 2-0 as he won both of their previous contests at UFC 245 and UFC 251 respectively.

Alexander Volkanovski is yet to be beaten in the UFC. After making his debut in 2016, it only took Volkanovski 3 years to reach the title. Along the way, he has beaten the likes of Jose Aldo, Chand Mendes and Brian Ortega. But none of his victories is as relevant or famous as the ones he had over Max Holloway. Holloway was touted as the best featherweight champion ever heading into their first clash.

Hence, beating Holloway twice has helped Alex build an amazing legacy that will last forever. However, in order to secure his place as the greatest 145lbs fighter to ever step inside the Octagon, the Aussie had to beat Holloway one last time.

Both fighters have improved a lot since their last clash in 2021. While Max put up a historic performance against Calvin Kattar, Volkanovski absolutely demolished The Korean Zombie. Hence, winning for either fighter was a hard job on paper. How did the bout ultimately play out? Let’s look at the proceedings of the trilogy bout.

Leg kicks have played a big factor in earning Alexander Volkanovski the wins over Max Holloway. Hence, Max tried to address that right from the start. He led with kicks to negate Alex’s striking. But the champ was ready for Holloway’s approach as he soon figured out a way around Max’s guard.

The round started heating up with only a few minutes to go. Alex started to land big punches on will and they seemed to cause a lot of damage to Max. But the champ got clumsy which allowed Max to land a few big shots as well.

Alex maintained the same approach in the second round as well. Every time Max tried to close the distance, Volkanovski seemed to find a way to land power shots on the former champ. A massive right hand from Volkanovski opened up a big cut on top of Max’s left eye. Holloway seemed focused on maintaining a low stance which also worked in favour of Alex as it allowed the Aussie to keep hitting the target without much of a fuss.

By the beginning of round 3, Volkanovski looked very comfortable on the feet. He intentionally let his guard down to lure Max closer to him. The champ then proceeded to land jabs which gave Holloway problems all night long. It also reopened the cut that Holloway suffered in the second round.

Despite being the smaller fighter, Alex was the stronger fighter in the Octagon by a huge margin. He almost rag-dolled Max and pinned him on the fence at the beginning of the 4th round. Although Max managed to break the clinch, he could not put the champ in any kind of danger whatsoever. The Hawaiian fighter also seemed tired at the end of round 4.

Max Holloway had to find a finish in the last round in order to win. Hence, he tried to mix things up by shooting for a takedown. But Alex staffed takedown very easily and engaged in a clinch. Fans are very much aware of how great Max is on the feet, but Volkanovski seemed to be on a completely different level.

He pretty much toyed with Max for the rest of the round. Volkanovski even tried to finish the fight in the last 10 seconds with a beautiful combo of punches. Ultimately the fight went the full distance and Volkanovski won the fight via unanimous decision. (50-45, 50-45, 50-45)

Volkanovski calls for a lightweight title shot after UFC 276

Alexander Volkanovski was very respectful of Max Holloway despite such a dominant victory. In the post-fight interview with Joe Rogan, Alex stated that he needed to remind himself about his own greatest. He also called for a title shot at lightweight. Volkanovski added,

Lightweights get ready, @AlexVolkanovski is coming for the crown 👑 #UFC276 pic.twitter.com/ORJwMTk2e9

“I want to be busy. I don’t think this division itself can keep me busy. I want to move up and go for double champ and I’ll keep two divisions busy. So hey, Charles or whoever gets the belt, nothing but respect. I’ll love to move up, get that double champ status and if I get both belts, I’ll keep them both busy.”

Islam Makhachev vs Charles Oliveira is in the works for UFC 281 for the vacant lightweight title. Alexander Volkanovski wants to face the winner of the fight in his next fight.