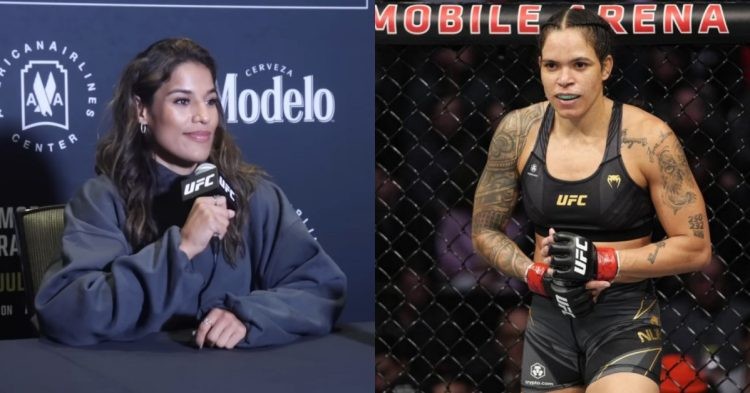 UFC Women’s Bantamweight Champion Julianna Pena has made a bizarre comment regarding her upcoming rematch against Amanda Nunes at UFC 277. Ahead of the very first title defence this Saturday, Pena shared how she plans to beat Nunes once again. However, she ended with a line that shocked the fans in all the wrong ways.

The Venezuelan Vixen is not known for holding back her thoughts. After her first win against Nunes at UFC 269, Julianna called herself the real mother as opposed to Amanda because she gave birth to her daughter. Amanda and her wife Nina Nunes have a daughter together but it was Nina who gave birth. That comment from Pena generated a lot of backlashes.

Although her comments in the recent press conference may not generate the kind of controversy that her previous comments, it is certainly one of the most bizarre comments uttered by any fighter in the history of UFC.

“I’m going to stand there toe to toe with the best in the world, and I’m going to give my best, and we’re going to see whose ovaries are bigger. I’m willing to bet that that’s me.” (h/t via MMA Junkie)

Fans are not happy with what Julianna Pena had to say

There have been plenty of fighters in the UFC who came out with controversial comments. Ahead of his fight at UFC 248, middleweight champion Israel Adesanya made some comments on a tragedy which caused an uproar. Even Conor McGregor got into trouble for making some religious comments before his first fight against Nate Diaz at UFC 196.

There also have been instances where a certain line from a fighter became an online sensation. But Julianna Pena’s comments have seemed to generate a very different reaction. In the comments section of the video, one fan implied that Pena should not have made the comment.

“lets pause and not resume for a moment”

Another fan in the comments stated that the ‘ovaries’ statement from Julianna Pena is up there with the worst lines of all time.

One person in the comments states that they could not believe that Julianna Pena really made that comment.

What do you think of Julianna Pena’s comments at the UFC 277 press conference? Do you think she crossed the line? Or is Pena perfectly justified to make the comments that she made? Let us know in the comments down below.