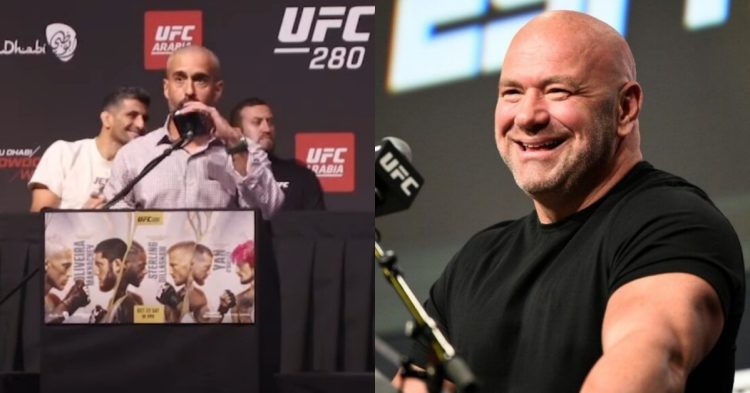 UFC just held its big press conference for the upcoming PPV UFC 280 and it was glorious! All the main card fighters were present on the stage as journalists from all over the world got to ask them questions. However, one big staple of the usual UFC press conferences was missing and it was none other than UFC President Dana White.

Whenever there is a big UFC event on the weekend, Dana is the person to moderate the press conferences. But this time, it was UFC commentator Jon Anik, who ran the show. But that was not too distracting as Jon usually acts as the announcer for official weigh-in events. So Anik was quite comfortable up on the stage. He will also host the ceremonial weigh-ins as Joe Rogan will not be a part of the UFC 280 broadcast team.

The press conference itself was everything that the fans have come to expect. While the former bantamweight champ Petr Yan shoved Sean O’Malley in the face-offs afterwards, Islam Makhachev and Charles Oliveira had a heated argument during the press conference. TJ Dillashaw also had his moment to shine on the mic as he had a funny reaction to 135lbs champ Aljamain Sterling’s comments on his doping scandal.

All in all, the event has set the mood for the much-anticipated PPV on October 22nd. In the main event, Oliveira and Makhachev will square off for the vacant lightweight title. The co-main will see Aljo defending his belt against Dillashaw. Sean O’Malley will also be on the card as he fights Petr Yan for the no. 1 title contender spot.

UFC President Dana White seems to have taken a back seat for the press conferences lately. The last time Charles Oliveira fought, at UFC 274, Dana was not the host for the official press conference. UFC 275 took place in Singapore and Dana skipped the entire event due to his son’s birthday, which was that weekend.

Dana White did not host the UFC 276 pre-fight press conference either. However, he was present for UFC 277 and UFC 278 events. So fans may ask, will UFC President Dana White be present for the biggest PPV of the year so far? The answer is yes. Dana confirmed earlier that he will attend the event.

In a conversation with Robbie Fox, Dana advocated that fans should try to attend at least one fight card in the UAE. White also revealed that former UFC owner Lorenzo Fertitta would also accompany him. He is looking forward to exploring all the nice restaurants in the country. But he may have missed the press conference as he may not have reached the country in time.