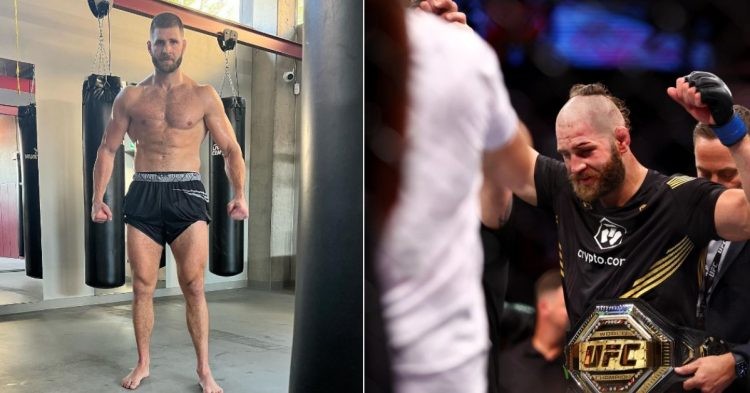 Jiri Prochazka has vacated the UFC light-heavyweight title after suffering a shoulder injury during camp just weeks ahead of his first title defense and rematch against Glover Teixeira at UFC 282.

UFC 282 was set to go down on Decemeber 10 inside T-Mobile Arena in Las Vegas for the UFC’s Light-Heavyweight championship. However, in unfortunate news, Prochazka has decided to vacate the UFC gold “out of respect for the athletes and the division” per UFC.

According to the statement from the UFC, Jiri Prochazka will require a significant rehabilitation period to recover from the shoulder injury. A person close to Prochazka revealed to ESPN that the injury could take up to a year to recover from and it “will be a long road back, unfortunately” for the Czech mixed martial artist.

According to Dana White, “this is the worst shoulder injury the doctors have seen in UFC history.”

Per Dana White: “This is the worst shoulder injury the doctors have seen in UFC history”

According to Ariel Helwani, Prochazka injured his shoulder around a week ago while training in Las Vegas. The Champion expressed his desire to compete despite the injury and “with one arm” but was told by the doctor that he could damage his shoulder forever if he decided to compete with it.

Just spoke to Glover and Jiri’s team. Here’s the full story on UFC 282, live from my car. pic.twitter.com/okx1yH2B0r

Needless to say, this is disappointing news for fight fans who were eagerly waiting for the rematch. Prochazka and Texiera shared the Octagon back at UFC 275, in a potential Fight of the Year outing that saw the challenger Jiri Prochazka beat Glover Texiera via submission in the fifth round to become the UFC Light-Heavyweight Champion.

In a sudden turn of events, the lack of a backup fighter means Jan Blachowicz and Magomed Ankalaev will share the UFC Octagon for the vacant, undisputed light-heavyweight title. The fight will mark Blachowicz’s second attempt at the 205 lbs gold. Paddy Pimblett vs. Jared Gordon will serve as the new co-main event of the evening.

The Polish fighter defeated Dominick Reyes at UFC 253 to become the UFC Champion. However, he lost to Teixeira in his second title defense back at UFC 267.

As for Magomed Ankalaev, the Dagestani fighter will look to create history as he puts his nine-fight winning streak on the line against Jan Blachowicz to become the third Dagestani fighter to hold the UFC hold. Ankalaev is coming off a second-round stoppage win over Anthony Smith.

It goes without saying, Glover Teixeira will not compete on the card and might have to wait longer before he can get his hands on the title again. At 43 years of age, it won’t be wrong to say that this is not the best time for the Brazilian fighter to sit out and wait for the title shot.