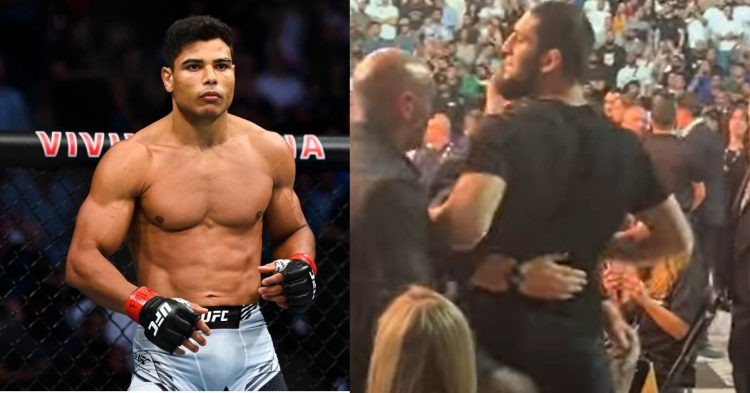 UFC 280 was one for the ages and delivered on all fronts. Not only with the impressive fights inside the Octagon, but with a fair few scuffles outside it. Unsurprisingly, Khamzat Chimaev was once again involved.

As it turns out, Chimaev was involved in a violent exchange with Khabib Nurmagomedov’s cousin Abubakar Nurmagomedov. The scuffle ensued during Islam’s post-fight interview after he beat Charles Oliveira in the night’s main event.

Paulo Costa, as he ever so often does, found a funny side to the whole ordeal. In a social media post, Paulo revealed what he thinks Abubakar told Chimaev before the brawl began. He captioned the post “Paulo’s the best-looking fighter and the best middleweight. Don’t be mad he stole your hat Gourmet Chen Chen, it looks way better on him.”

Paulo and Chimaev have been going back and forth for a while now. It all began during their showdown at the UFC PI ahead of UFC 279.  Ever since there has been bad blood between the pair and many speculations about a potential fight in the future.

However, with Khamzat seemingly deciding to stick around at 170 for now, and Paulo booked to fight Robert Whittaker at UFC 284, fans will have to wait for this one. In the meantime, could we potentially see a grudge match at welterweight between Abubakar and Khamzat?

Despite rumblings of a #1 contender fight against Colby Covington, the events of Saturday night could make Khamzat change his mind. Abubakar, on the other hand, is fresh off an underwhelming win against Gadhzi Omargadzhiev at UFC 280, meaning a fight could be set up for the future.

However with 170 already a struggle for Chimaev, many would suggest ‘Borz‘ instead focus on getting the title and moving up to 185. With arguably 2 fights (if he wins) left for his welterweight stint, Chimaev has a clear path to the title.

Although it seems pretty straightforward, we must remember that Covington is no slouch and there is a reason why Leon and Usman are the champions. Do you think Chimaev will be the champion next year? Do you see him fighting Abubakar and Costa? Leave your thoughts in the comments below.