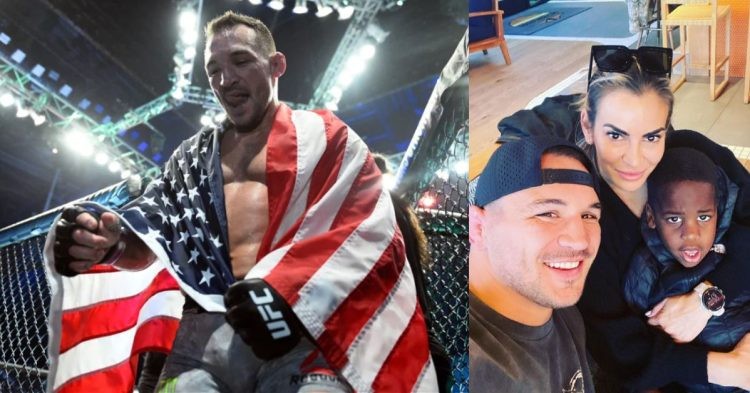 Michael Chandler is one of the most fascinating UFC fighters right now. Chandler’s splendid personality and fighting style have earned him the admiration of fight fans all over the world. Long story short, as his popularity has grown, fans have expressed an interest in learning more about his personal life.

Despite being quite active on social media, “Iron” never talks about his family there. Although he has been married for almost 8 years, not much is known about his personal life. After their marriage, ‘Iron’ and his wife Brie Willet adopted a child. Chandler revealed in an interview that his wife has always wanted to adopt a child.

According to Chandler, Willet’s previous experience with orphan children who only wanted to go home was the driving force behind this major step.

Why did Michael Chandler choose Hap Michael as his son’s name?

Michael Chandler named his child after a legendary wrestling coach at the University of Missouri. He went by Hap Whitney. Whitney was a four-time Missouri state champion and Chandler’s close friend.

There are reports that Michael Chandler’s son’s name is Hap Whitaker, with his second name inspired by Mike Whitaker, whom Chandler met at a Nashville restaurant. However, that’s far from the truth. Michael Chandler has cleared it on social media, calling “Wikipedia wrong”.

Chandler is an incredible fighter inside the octagon, but he is an even better person outside of it. What were your thoughts on the couple’s decision to adopt a child?

For the past eight years, UFC fighter Michael Chandler has been married to Brie Willett.

The lightweight sensation proposed to Brie Willett in March 2014, and the couple married in September of that year.

Michael Chandler’s wife, Brie Willett, is a doctor who specializes in aesthetic medicine, as previously stated. Brie attended Taylor University. She graduated with a double major in psychology and biology.

She then attended Southern Illinois University and earned a master’s degree in Physician Assistant studies. Brie also competed in the 2003 Missouri Teen Competition when she was younger. While Michael Chandler would go on to be an elite mixed martial artist, Brie, on the other hand, chose a career in medicine.