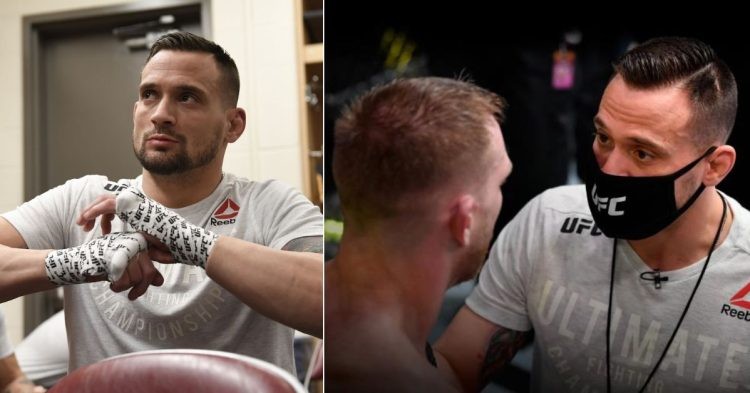 UFC Vegas 65 brought in more than one disappointing news in a matter of an hour. First, Derrick Lewis vs Sergey Spivak was pulled off after Lewis fell ill with a no-COVID, non-weight-cutting illness. And in another, long-time coach, former UFC fighter James Krause was suspended/pulled off from UFC as confirmed by Miles Johns.

“My coach last night at the dinner table was pulled and they said the UFC was suspending him so he couldn’t be here in my corner.” Miles Johns said after a hard-fought win over Vince Morales in the preliminary card of UFC Vegas 65.

There was no official confirmation by the UFC regarding the decision and barring the post-fight Octagon interview from Miles Johns, there have been no statements whatsoever. While Johns did not mention the name of his coach, it is understood he was training under James Krause of Glory MMA for this camp.

There are rumors that the UFC suspended James Krause after the controversy earlier this month during Darrick Minner vs Sha Yilan. Krause’s fighter Minner made his way to the Octagon injured, and somehow the information was leaked hours before the fight. James Krause coached Minner for the fight. However, he was not present in his corner.

This led to a huge change in the betting lines, leading to huge controversy. James Krause, who has always been vocal about how much he makes with betting, even dedicating an entire podcast to the same, came under severe scrutiny.

Between the Laura Sanko rumour. Betting suspicions and now this. We need a James Krause 24/7 reality show.

Bruh Miles is about to get in trouble

I’m hearing now that Derrick Lewis is 100% fine and was asked to withdraw by the UFC as part of a backstage sting operation to catch the diabolical James Krause in the act. Ladies and gentlemen, WE GOT HIM

Oh man, Miles Johns revealed that James Krause was suspended and not allowed to be in his corner for this fight. Perhaps an insight into the investigation into the Minner fight?

The drama around Krause is getting crazy

They trying to keep him off Laura sanko 😂

Earlier, UFC President Dana White had confirmed UFC’s new rule of fighters not being allowed to bet on UFC fights. On a slightly funnier note, fans also pointed out Krause’s alleged relationship with Laura Sanko, per Megan Anderson, and opined how that could be the reason behind the suspension.