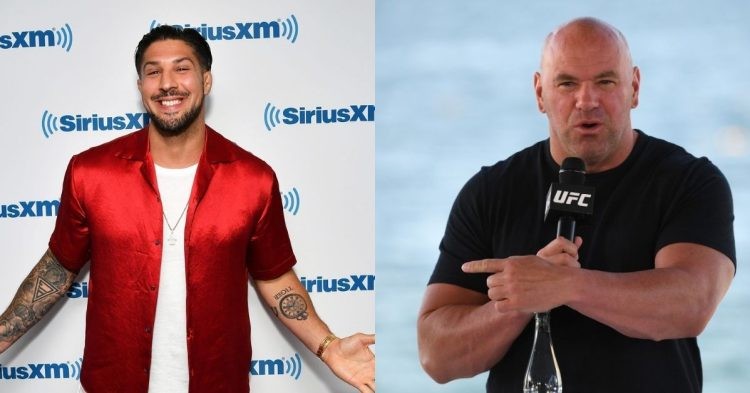 Former UFC Heavyweight Brendan Schaub went off on UFC President Dana White for roasting him in a recent media interaction saying “I heard this thing today, and I don’t know how true it is, Pat Miletich was saying we told Khamzat not to make weight because we weren’t selling tickets,” White told reporters at the “Contender Series” press conference.

“The fu****g show was sold out going into that day of the weigh-ins. I don’t know if Pat really said that, but if he did, he has to be the dumbest motherf****r on the planet. I mean, you know how fucking stupid you have to be to even think something like that, let alone say it publicly and act like you’re fu****g serious.” White continued. “If you think we told Khamzat Chimaev to not make weight, then Khamzat shows up and the fans are all pissed off at him and stuff, and he’s going to just…. if you know anything about the sport, this is a guy that was actually in the sport, training and fighting and everything else. If Pat really said that, holy s**t, we might have to send him to the out fu****g clinic, the brain clinic, to get him checked out.”

Schaub didn’t hold back in his response to White saying he’s a “low budget Vince McMahon” and a “Bully”. Schaub also reminded White that he is a “failed cardio kickboxing instructor who had two rich friends in high school to fund this business”.

Brendan Schaub and Dana White have some bad blood and it seems to be increasing lately but, this isn’t the first time we have seen things get escalated between the two.

Back in 2015, Schaub was seen criticizing the UFC for their Reebok Sponsorship deal. Schaub was one of many fighters who spoke up against the sponsorship deal accusing White of scrapping the fighter’s personal sponsorships and forcing them to wear the Reebok kit.

Even back then Dana White heavily criticized Schaub for his comments and I guess that’s what started the whole beef. Then in 2018 current UFC Middleweight champion and former kickboxer, Israel Adesanya posted a video directed at Schaub over comments he made on his “Below the Belt” podcast about kickboxers moving into MMA. Shaub said he was referring to a different fighter, but White came to Adesanya’s defense nonetheless, calling Schaub a “MORON” and downplaying his ability in the sport.

Responding then Schaub said “You’re CEO of a billion dollar company and you’re trying to talk s— to somebody who retired four years ago, on social media. Imagine somebody else, a head of a corporation, they’d lose their job.” He continued by implying that many fighters, media members, and other staff members have taken issue with how White handles the business.