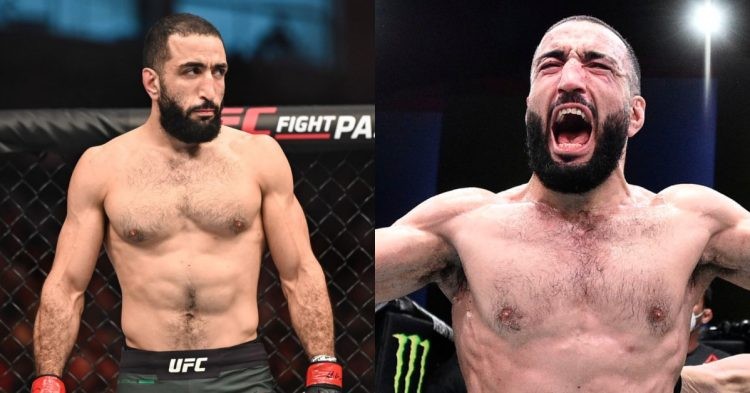 UFC 280 is finally here and it is set to go down this weekend on October 22nd. From Charles Oliveira vs Islam Makhachev to Sean O’Malley vs Petr Yan, the main card features almost all the hottest UFC stars at the moment. But one glaring omission from the list is the 5th-ranked welterweight fighter, Belal Muhammad.

Belal will fight another rising contender Sean Brady in the prelims of the most-anticipated PPV. While Muhammad has not been beaten in the last 8 fights, undefeated Brady has won all 5 of his UFC fights so far and is ranked 8th in the division. So it is a pretty high-profile fight in terms of the next potential title contender at the 170lbs division.

However, the placement of the fight is less than desirable. Although lesser-profile fights are on the main card of UFC 280, the fight between Belal and Sean could not get a spot on it. Despite that, it does not look like Belal is too fussed about it. In a recent interview with MMA Junkie, The Bully revealed that he wanted to fight on this card only.

“I definitely wanted it to be five rounds, especially after that last five-round fight, but the biggest thing for me was just fighting here, because I think it could have been a main event on any Fight Night card, but I said I wanted to be on this fight night,”

“I wanted to be on this card, biggest card of the year, be back here in Abu Dhabi, because the last time I was here – the energy, the fans, it was amazing. I was like I want to come back, I need to come back, and I need to be put on this card.” (h/t via Yahoo)

As fans already know, the PPV is taking place in the UAE. So Muhammad will have the crowd on his side. On top of that, it has also provided him with the opportunity to have Khabib Nurmagomedov in his corner. The 34-year-old also got to hold the training camp with Team Khabib as they were preparing for Islam’s fight against Charles on the same card.

Despite having names like Stephen Thompson, Vicente Luque and Demian Maia in his win column, Belal Muhammad is yet to get a big fight in the division. His fight against Leon Edwards in 2021 ended when Muhammad could not continue after an accidental eye poke. But the company did not give Belal a fight which is similar to that in stature.

However, having the chance to be on the main event of the prelims is not a bad position to be in. It means that Belal’s fight will be free for the audience to enjoy on a big television network like ESPN. If Muhammad does manage to put on an entertaining fight, it will certainly earn him a lot of fans.

But the fans think that UFC is disrespecting the Chicago native. While some were left baffled by the decision, others think Belal would be a prelim fighter even if he had managed to get a hold of the UFC title.

wtf, is that “Winning Streak” Belal Muhammad on the prelims???????? https://t.co/cq7BTHiEHE

Why in the fuck is Belal Muhammad vs. Sean Brady on the prelims lmao?????? pic.twitter.com/0RA8Qkttzx

Why is Belal Muhammad in the prelims?

Come on. UFC on some PC shit or what? https://t.co/pzTrzBEwkR

Belal Muhammad can only be the top 5 fighter to fight in prelims. https://t.co/JWosGrrLxe

What are your thoughts on the matter? Do you think Belal deserved a spot on the main card? Let us know in the comments down below.