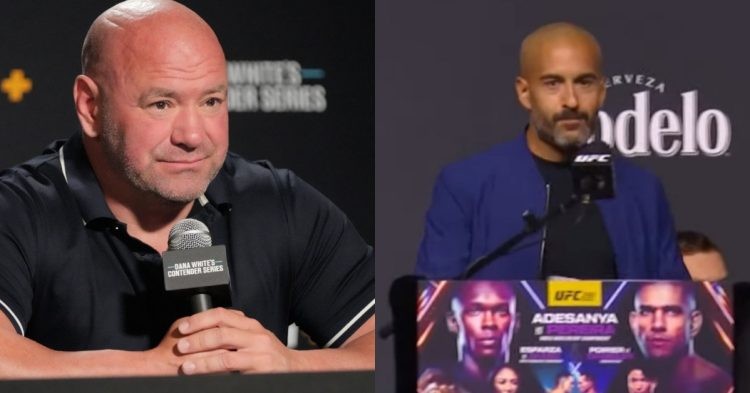 The trend of UFC President Dana White missing press conferences continues! The much-awaited UFC 281 press conference just concluded. Fans were excited to see the two headliners Israel Adesanya and Alex Pereira coming face to face. Although the back and forth between the two was brief, they had a very intense staredown after the Q&A portion of the press conference was over.

However, it was Mick Maynard who stood between the fighters during their face-off instead of Dana White. Similar to UFC 280, it was Jon Anik who conducted the press conference. As usual, Anik did an excellent job moderating the event. Jon Anik is an excellent personality to have as he is an out-and-out professional. His humble mannerisms make him a fan favourite.

But, there is no doubt that Dana White adds an extra layer of entertainment to the press conferences. He has a personality that demands the fan’s attention.

Although there was nothing wrong with Jon Anik’s approach to the press conference, the fans still missed Dana’s charm and one of them even asked why the 53-year-old did not feature at the presser.

Where is Dana? Lol

Will Dana White be present at UFC 281?

The Ultimate Fighting Championship (UFC) is on fire right now and their recent PPV cards just prove how talent-rich they are! Their previous PPV, UFC 280, had perhaps the most appealing fight card in recent memory. However, the promotion is not taking a step back on the quality and is putting out another stacked card. As fans know, UFC middleweight champ Israel Adesanya is defending the title against Alex Pereira.

The reckoning awaits on the world’s biggest stage. #UFC281 is almost here 🗽

The is a lot of history between the two and it boils over on November 12th at MSG. The second title fight on the card is between the current strawweight champ Carla Esparza and Zhang Weili. But, perhaps the bout with the most entertainment value on the card is Michael Chandler vs Dustin Poirier. Dan Hooker and Frankie Edgar will also feature on the card.

So the card is definitely not lacking any star power. But the question is, will Dana White be present at the event to wrap the belt around the winners in the main and the co-main event? By all likelihood, Dana will be present at the event. Whenever UFC holds an event inside the Madison Square Garden arena, it is always a special occasion and Dana would not want to miss that.

Are excited about UFC 281? If you are, which fight are you looking forward to the most? Let us know in the comments down below.