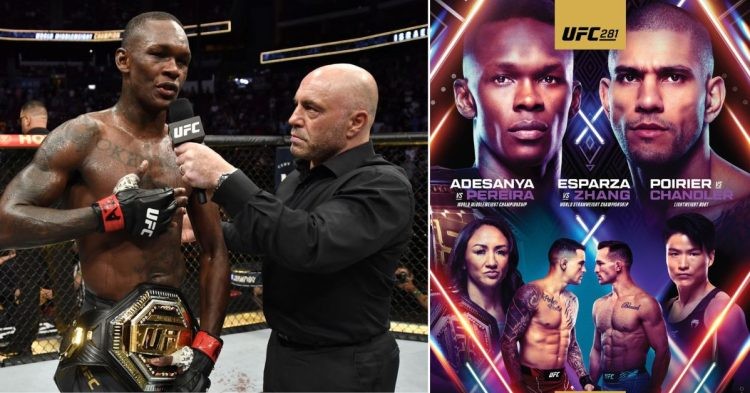 Joe Rogan will return after a two-month hiatus to resume his duties behind the commentary desk, joining Daniel Cormier and Joe Anik for commentary duties at UFC 281: Israel Adesanya vs Alex Pereira inside Madison Square Garden in New York. Rogan was missing from UFC 280 PPV between Charles Oliveira vs Islam Makhachev.

While it’s been more or less two months since we last heard Joe Rogan call UFC fights, fans are still divided on whether he should be given the responsibility behind the commentary desk. It’s safe to say that the job of a commentator is one of the hardest! To be able to call a fight doesn’t come without its fair share of criticism from fight fans.

Your commentary on Israel/Jan fight was so biased. You’re a legend but you need to watch the fight with your commentary.

bro the ufc commentary stinks watch ufc 259 main event and listen how biased joe rogan and Daniel Cormier are towards Israel adesanya. jan blachowicz got no respect and the commentary was acting like Izzy winning every round even though he lost a majority decision lol

That’s what happened when Israel Adesanya squared off against Jan Blachowicz back at UFC 259 in his attempt to become a two-division Champion. Adesanya fell short against Blachowicz, however, the commentary of the fight told a different story.

2. Herb Deen is one of the greatest national treasures ever.

3. Nunes is the greatest women’s fighter ever

And 4. Israel is pretty garbage on the ground 😂.

Fans slammed Joe Rogan for being biased towards Israel Adesanya and singing praises of the Middleweight Champion despite losing the fight on the feet.

Joe Rogan will be at UFC 281: Israel Adesanya vs Alex Pereira

Joe Rogan will once again call Israel Adesanya’s fight against Alex Pereira, and one wonders how the response of the crowd will be this time around. It’s not just fans, but also fighters who have criticized Rogan for his biased commentary.

Commentary is so bias is unbelievable, makes me hate this shit

“I try to be very fair, always, with my commentary. And I’m also very respectful. Like, even if you think that my commentary was biased, or one way or another, you’ll never think I’m disrespectful, ‘cause I try to; unless someone’s doing something dirty.” Joe Rogan had said.

Heading into UFC 281, these comments are obviously going to make their way on the internet once again. What are your thoughts on Joe Rogan’s commentary? Do let us know in the comments section.