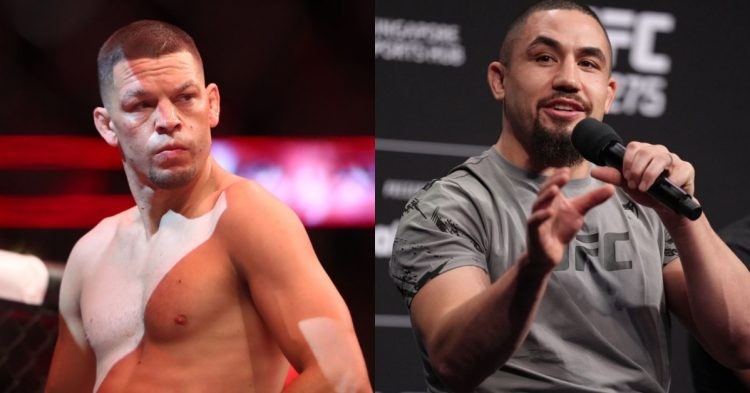 Nate Diaz is finally a free agent after his win over Tony Ferguson at UFC 279. After finishing up his UFC contract in a glorious fashion, Diaz wants to try out his hand at boxing. While he has never boxed in a professional capacity before, former UFC middleweight champ Robert Whittaker thinks Nate will certainly do well in boxing.

During a recent interview with James Lynch, Whittaker explained why he thinks Nate Diaz may succeed in pure boxing instead of kickboxing. As the fans know, Nate is not the most dynamic kickboxer in the UFC. His kicks are never the most effective and he is often vulnerable to kicks from his opponents. But, Nate fares much better in pure boxing. Whittaker pointed it out during the interview.

“I think Nate’s like a better boxer than he’s like a kickboxer and you can see him utilize his boxing skillset more than his kicks and whatnot in his fight repertoire. But, how he goes against (boxers)? I think he’ll do very well. He’s got the eye for it, he’s got the brain for it, he’s a good boxer.”

Whittaker, who himself is a great boxer, recognizes the quality in Nate. Although he is not the fastest or hardest puncher in UFC, Nate is certainly one of the most fluid. In his both fights against Conor McGregor, Diaz hurt The Notorious One over and over again with some well-timed counter punches. Even against Leon Edwards, Nate was amazing with his hands.

Hence, Nate Diaz exiting from MMA to join boxing may not be the worst idea in the world.

Nate Diaz wants to dominate the world of boxing

After submitting Tony Ferguson at the last UFC PPV, Nate Diaz told Joe Rogan that he wants a break from MMA. Diaz has been fighting inside the Octagon for 15 years and started his MMA career in 2004. So him being tired, is not surprising at all. In the latter stages of his UFC run, Nate constantly butted heads with the company. Hence, he feels burnt out by the sport.

So exploring boxing will not only give Nate the opportunity to earn more money, but it may also rejuvenate his passion for fighting. As for his potential opponent, Jake Paul tops the list of potential contenders. Jake even revealed that he’d be willing to fight Diaz after his performance against Tony.

The chatter around the Paul fight certainly seems real and things are certainly moving in the right direction. Diaz already stated that he will be in attendance for Jake’s fight against Anderson Silva in October. If the result goes his way, then it will not be surprising to see an in-ring face-off between Nate Diaz and Jake Paul.