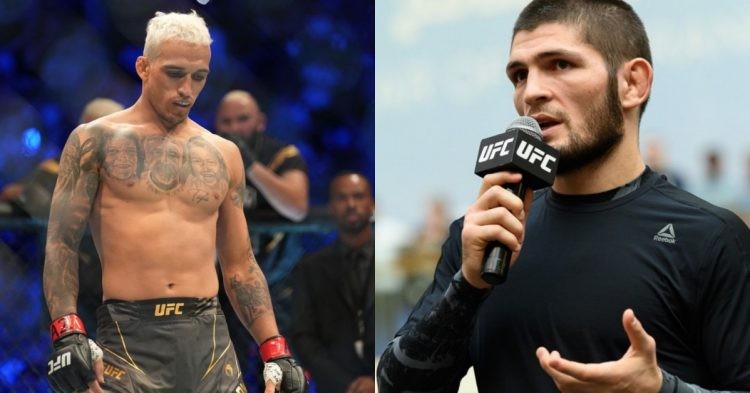 Khabib Nurmagomedov has dropped a big bomb ahead of the much-anticipated UFC 280! In a recent Tweet, he stated that Charles Oliveira may not even make it to the fight against Islam Makhachev at the upcoming PPV. According to him, the UFC will replace Oliveira with Beneil Dariush to take on Islam for the vacant UFC lightweight belt.

UFC stated in July that Charles will fight Islam in the main event of UFC 280 for the 155lbs strap. There were speculations of Conor McGregor possibly sliding in, to fight Oliveira at the event scheduled to take place in UAE. However, all the rumours were laid to rest after the announcement from the company itself. Both fighters have stated their excitement for the contest on October 22nd.

The Eagle, who is set to be in Makhachev’s corner, previously called the bout between his cousin Islam and ‘Do Bronx‘ a dream fight. He also expressed that the Brazilian will never be a true champion if he does not face Makhachev inside the Octagon. Although the bout is official, Khabib Nurmagomedov is still apprehensive about Oliveira actually making the walk to the Octagon.

The 33-year-old took to his Twitter account to write his theory on how the main event of UFC 280 may play out!

Fans criticize Khabib Nurmagomedov for his take on Charles Oliveira

Khabib Nurmagomedov is one of the most beloved fighters in the history of MMA. Fans adore him for his fair treatment of his fellow fighters. But it looks like that notion is slowly changing. The lightweight GOAT has downplayed Charles Oliveira as a legit threat to Islam Makhachev. Although he has not bad-mouthed Charles, Khabib has not exactly praised him either.

The constant criticism from Nurmagomedov’s end has irritated the fans immensely. But the latest tweet seems like it has broken the camel’s back. Underneath the particular tweet, fans called out Khabib and slammed him for the comments he made on Charles.

One fan pointed out that Islam and Khabib combined, have pulled out of more fights than any other big-name fighters in the division. One fan also called Khabib Nurmagomedov, “Fake humble.” Someone also pointed out the possibility that Khabib’s manager Ali Abdelaziz may the culprit behind the tweet.

Here are the reactions to Khabib’s tweet on Charles Oliveira

“I think Charles will not show up” 🤡 pic.twitter.com/o28jJs5ZH8

Come on Ali you didn’t even try this time

What do you think of the tweet from the former lightweight champ? Do you think Charles Oliveira will miss out on UFC 280? Or do you think Khabib Nurmagomedov is overthinking? Let us know in the comments down below.