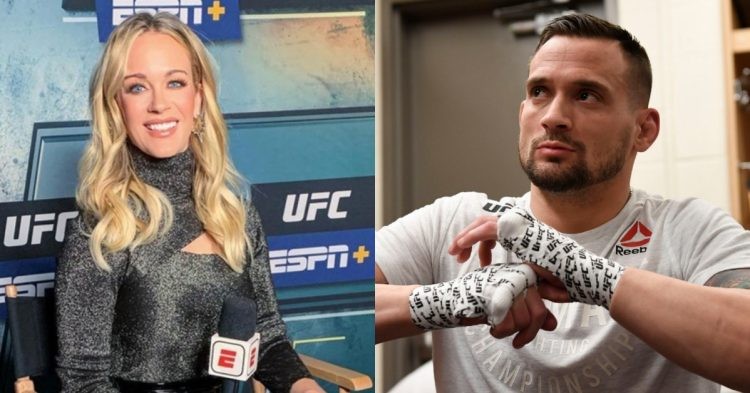 Was James Krause suspended because of Laura Sanko? (Credit: Twitter)

Mile Jones took on Vince Morales at UFC Vegas 65 prelims. The bout went the full distance and he picked up a decision win after a scrappy bout. Although his 13th career win should have been the subject of headlines, it is his coach James Krause who is getting all the attention.

After his win, Miles made a shocking revelation and let the fans know that Jame Krause was not allowed to be in his corner. According to the 28-year-old bantamweight fighter, UFC literally “pulled” James Krause out of the event and suspended the Glory MMA coach. It sparked a lot of confusion amongst the fans, as to why the UFC took such a drastic step.

A few weeks ago, UFC banned its fighters and coaches from betting on the fights. But James Krause admitted his interest in betting and revealed that it is a large source of his income. The suspicions grew wider when James’ fighter Darrick Minner suffered a questionable loss recently. After the result, reports came out that there were unusual betting activities surrounding the fight.

Reports later revealed, the New Jersey Division of Gaming Enforcement has prohibited betting on fights that have James Krause associated with them. So that may be a reason why UFC suspended Krause.

However, UFC’s official statement did not point fingers at anyone in particular. But, fans think the reason behind his suspension may have something to do with his recent affair rumors with UFC presenter Laura Sanko.

Recently, former Glory MMA fighter Megan Anderson made some huge allegations against her former coach James Krause. According to Megan, James paid no attention to her during her title fight against Amanda Nunes. But that was not all, she also alleged that Laura Sanko had an affair with James Krause. It sent the MMA fans into a meltdown as both are married.

Laura Sanko is a former MMA fighter with a record of 1-0. But, fans know her best for her role as a UFC broadcaster. She was the first female commentator in the UFC. Coincidentally, she was also a part of the UFC Vegas 65 broadcast team. Hence, fans are coming up with some wild theories and they think Laura Sanko may just be the reason why Krause was banned from the event.

Between the Laura Sanko rumour. Betting suspicions and now this. We need a James Krause 24/7 reality show.

People are thinking that James Krause is banned because of the Darrick Minner situation. It’s probably because Dana is jealous that he banged Laura Sanko 🤣 #UFCVegas65

This is hilarious. Would this have anything to do with @laura_sanko and Megan’s comments about their alleged affair?? 🤪…of course they would blame Krause for it lol

All the speculation aside, UFC did not confirm Mile Jones’ allegation. However, they did not refute the claim either. So it will be interesting to see if either party issues an official statement on the matter or not.