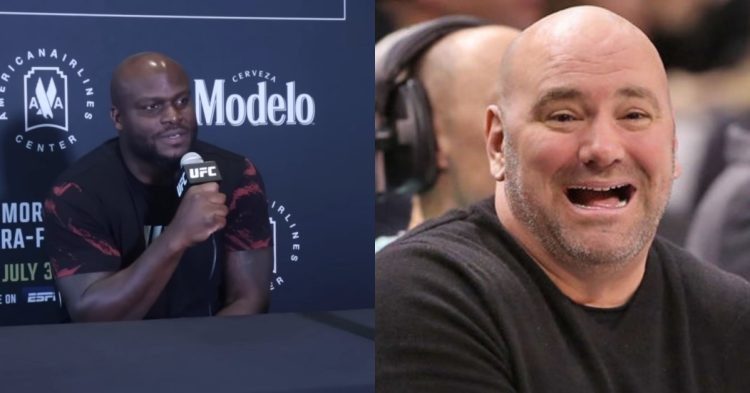 It does not look like UFC heavyweight fighter Derrick Lewis is a big fan of the media. Recently, he appeared infront of journalists to promote his upcoming fight against Sergei Pavlovich at UFC 277. During the conversation, Derrick Lewis revealed that he wants to buy the UFC with the money he has earned so far. His reasoning behind it left everyone in splits.

Derrick Lewis is coming off a knockout loss against Tai Tuivasa at UFC 271. However, he has left the loss behind him and is ready to move forward in his career. But it seems like all the criticism after his last loss has left a bad taste in his mouth about the press. After the loss to Tai, there was a lot of chatter in the media about whether Derrick was lost a step or not.

The Black Beast is self-admittedly not the best fighter in the world. Lewis has openly stated that he fights only for money and has no interest in leaving behind a good legacy. Hence, he does not understand the criticism and he made sure to let the journalists know about his displeasure in his own unique way.

“I’m sitting up here, telling your a** the truth. I don’t give a f**k about this fighting sh*t. Y’all sitting up here telling me ‘oh Derrick I don’t think Derrick got it.’ Well f**k, I’ve been telling y’all. F**k y’all.”

UFC President Dana White has previously stated that the company is worth either $9 or $10 billion. So, unless Lewis has hit the lottery, it is safe to assume that the 37-year-old is only joking.

Although he may not come across as someone who is interested in winning the UFC heavyweight championship, Derrick Lewis holds the record for most knockouts in UFC history. So it does prove that Lewis takes his craft very seriously. As mentioned before, he is coming off a loss and that too in Texas. So Lewis will try to avenge his defeat in the upcoming fight against Sergei.

Although Pavlovich suffered a terrible knockout loss at the hands of Alistair Overeem in 2018, he bounced back with 3 back to back 1st round stoppage wins over Marcelo Golm, Maurice Greene and Shamil Abdurakhimov. He managed to knock out all of them inside 1 round. It goes to show that Lewis will not have an easy task ahead of him this weekend.

As the fans know. Derrick Lewis is perhaps the hardest puncher in the division alongside the current champ Francis Ngannou. So he may go out there and knock Sergei out in the first round. But Pavlovich is more than capable of returning the favour. It will definitely be one of the most entertaining contests on the entire card.

Who do you think will win between Derrick Lewis and Sergei Pavlovich? Do you think the momentum will give Pavlovich the advantage? Or do you think Lewis will finally get his hand raised in Texas? Let us know in the comments below.