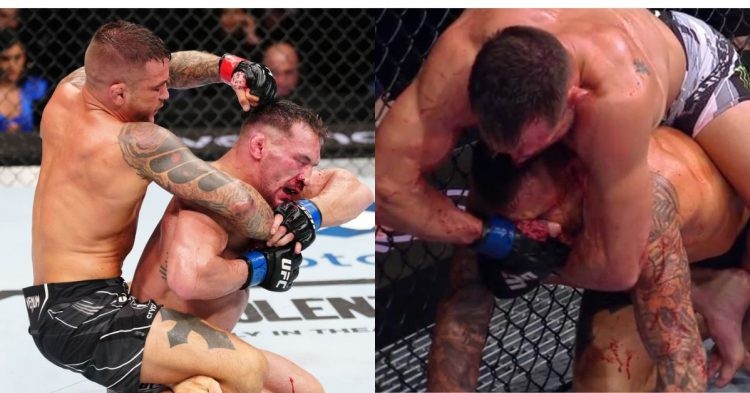 UFC 281 was an absolute banger and besides the exciting title fights, the lightweight bout between Dustin Poirier and Michael Chandler lived up to the hype. Poirier submitted Chandler and the fight earned the ‘Fight of the Night’ award for an awesome performance.

However, many things happened during the fight that labeled Chandler as a cheater. ‘The Diamond’ accused Chandler of cheating in his post-fight interview. Chandler punched back of Poirier’s head, fish-hooked him on one occasion, and was caught blowing his blood on Poirier’s face.

During the post-fight press conference, Chandler addressed this incident. ‘Iron Mike’ admitted the accusations and claimed that the fish-hooking incident was accidental. He said: “Yes, I will admit, I will admit yes, his mouth was open and my hand went inside of there and was on his mouthpiece.

The Michael Chandler fish hook on Dustin Poirier during their #UFC281 fight pic.twitter.com/iN1m9RYP66

When Chandler was asked about using his own blood to cover Poirier’s face, he stated that he didn’t mean to blow his blood because he was just trying to breathe.

Fish hooking to try and secure a submission. Trying to spit blood in Dustin’s mouth. Michael Chandler everybody pic.twitter.com/qIeGhVZAoX

“If I wanted to breathe, that blood needed to come out. So it wasn’t a malicious, weird thing, but it was definitely like a, ‘Sorry you’re down there, but I didn’t create gravity,’” Chandler added.

When talking about the other allegations, Chandler said he believed those were unintentional. “You all know I’m not a cheater. I love this game. I don’t cheat.” ‘Iron Mike’ added assuring that he is not a cheater.

Although Dustin Poirier won the bout and beat one of the toughest fighters in Michael Chandler, he was not happy with Iron Mike’s dirty tactics. Chandler gave his all in that bout and put up a phenomenal performance. However, his actions were a bit extent as per Poirier and some fans.

When Poirier was relayed by the reporters about Chandler’s explanation about the incident, he insisted that it was intentional. Speaking to the media at the post-fight presser, ‘The Diamond’ opened up about what he told Chandler in the ring. Poirier said: “I told him this is my house. That’s what I told him.

‘This is my house.’ That’s it. And I told him he’s a dirty mother*****, too, for putting his fingers in my mouth and blowing his nose. It’s all good.”

After submitting Chandler, Poirier talked about this in his initial post-fight speech in the cage. Poirier doubled down on Chandler fish hooking him to get the rear naked choke. He later stated that it’s all good and there is no bad blood between them.

With this win, Poirier has bounced back from his loss against Charles Oliveira and is now one step towards getting another title shot. Meanwhile, Chandler will look to bounce back from this loss in his next fight but he has proved again that he is an elite fighter in the lightweight division.