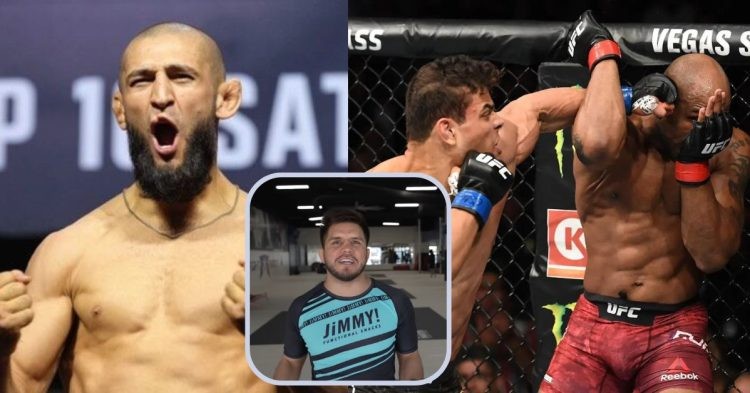 UFC’s new villain Khamzat Chimaev is most likely to go against Paulo Costa for his next fight in the middleweight division. After Chimaev missed weight by a whopping 7.5 pounds for his previously scheduled bout against Nate Diaz at UFC 279, it was almost confirmed that the Chechen will move up a weight class.

Former UFC champion Henry Cejudo recently broke down how a potential fight between Chimaev and Costa will play out. Cejudo detailed why Paulo Costa could be a problem for Khamzat.

“I personally think that’s a tough fight for Khamzat. Paulo has gone against world-class wrestlers and has won, has defended him, he wasn’t taken down by Yoel Romero.”

Henry pointed out Costa’s solid takedown defense, as it was evident in his battle against Yoel Romero. Talking about the fight, Henry said:

Paulo Costa and Khamzat Chimaev had a little verbal altercation during the week of UFC 279. It was rumored then, that the two might cross paths at some point.

Chimaev is an elite wrestler, but we’re yet to see how he performs against a top contender in an upper weight class, with a superb takedown division. Moreover, Costa is a dangerous striker as well, with massive durability and hard-hitting hands.

It is a known fact that Paulo Costa is one of the best strikers in the middleweight. As per Cejudo, it is Costa’s incredible striking that is going to be a huge problem for Khamzat Chimaev. Costa has proven his worth against some of the hardest hitters of the division in the likes of Yoel Romero, Marvin Vettori, Israel Adesanya, and more.

However, the fight against Adesanya cost him a knockout defeat, but his durability and power were evident in his fights against the current champion and Romero. Talking about Costa and Chimaev matchup, Cejudo said:

“He’s always looking for that left body shot. He’s gonna welt you over. He’s gonna will you over and I think that’s what makes Paulo Costa extremely dangerous.”

Henry predicted that Costa will derail the hype train of Chimaev and with his striking and anti-wrestling techniques; he can stop Chimaev both on his feet and ground.

However, fans had something else to say about this prediction of Cejudo. When Costa went against Adesanya, Cejudo had predicted that Paulo would beat Israel but that went south real fast.

One fight fan addressed this and wrote: “Didn’t Cejudo say Costa would beat Izzy, but ended up with one of the most sorry performances for a title fight?”

Another user pointed out that Henry also predicted Usman would win against Leon Edwards but that was proven otherwise. “When Khamzat beats Costa, will you have the same look on your face when Usman got knocked out?”

Whoever wins between these fighters, this is surely going to be a very entertaining bout when this fight happens. With two of the most aggressive men on the roster, this fight has a huge possibility that someone will go to sleep.