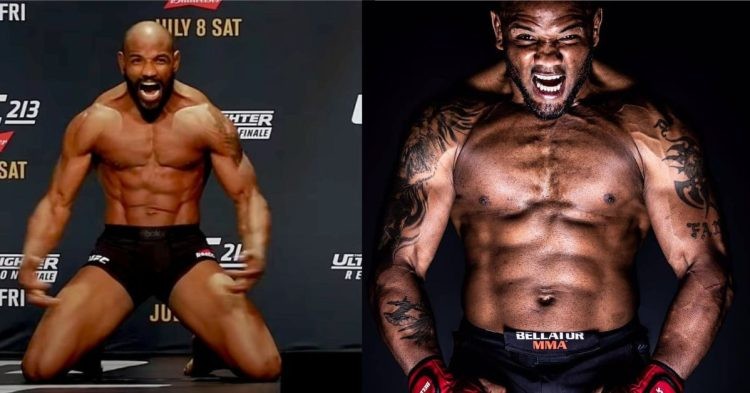 Yoel Romero might be one of the scariest and perhaps greatest fighters to have fought in the UFC. ‘The Soldier of God’ has been making a name for himself in the world of combat sports since winning silver in the Olympics.

At some point, Yoel decided to transition into MMA. He debuted in the UFC in 2013 and became an unstoppable force. Romero faced the most elite fighters in the middleweight division such as Lyoto Machida, Chris Weidman, Luke Rockhold, Robert Whittaker, Israel Adesanya, Paulo Costa, and more.

After becoming a fearful wrecking machine in the middleweight division, Romero earned a shot at the interim title on UFC 213, after achieving eight-straight wins. He got a title shot against Robert Whittaker.

Whittaker and Romero gave one of the most exciting title fights in the history of UFC, however, the Cuban lost to Whittaker via unanimous decision. But, following that fight, he would fight Luke Rockhold for the interim title in his next octagon outing.

The Cuban beat Luke in one of the most infamous middleweight fights. However, he could not win the UFC gold as he missed weight. But that did not stop the Cuban wrecking ball, as he’d fight Whittaker again for the title at UFC 225. Even in the second fight with Robert, Romero lost via decision after 5 rounds of war.

Romero would again get a title opportunity to fight for the undisputed UFC middleweight title against Israel Adesanya at UFC 248. This time, however, Yoel did not fight like a rampaging destroyer, instead, he fought a technical and more like a less eventful title fight. Israel beat Yoel via decision and this fight would prove Yoel’s last fight in UFC.

All the Title Fights Yoel Romero Had in the UFC

A botched weight cut against Rockhold would disrupt the opportunity of Yoel Romero to be crowned as the interim champion. Yoel gave one of the most highlight moments when he knocked out Luke. But if not for the weight miss, he would’ve been the interim UFC middleweight champ right then.

Unfortunately, he even missed weight in the second title fight against Robert Whittaker. The Cuban has had four title fights in his UFC career. It’d be appropriate to say that Yoel Romero cemented his name in combat sports history as one of the best fighters to never hold a UFC title.

After losing to Whittaker in a title fight, Yoel got another title shot against Israel Adesanya in March 2020. Still, he couldn’t outstrike the champion, resulting in another championship loss on his resume and making him one of the top UFC fighters who never won a title.

After leaving the promotion, Romero signed to Bellator MMA. He competes in the light heavyweight division currently and remains to be an unstoppable force inside the cage.

The ‘Soldier of God’ might be 45 years old but he is still the same unstoppable KO machine inside the cage and improving his 14-6 pro MMA record. He has a 13-5 record in the UFC and only has had two fights in the Bellator MMA.

The Cuban is scheduled to fight Melvin Manhoef at Bellator 285 on Friday, September 23, 2022, in a Light Heavyweight bout.