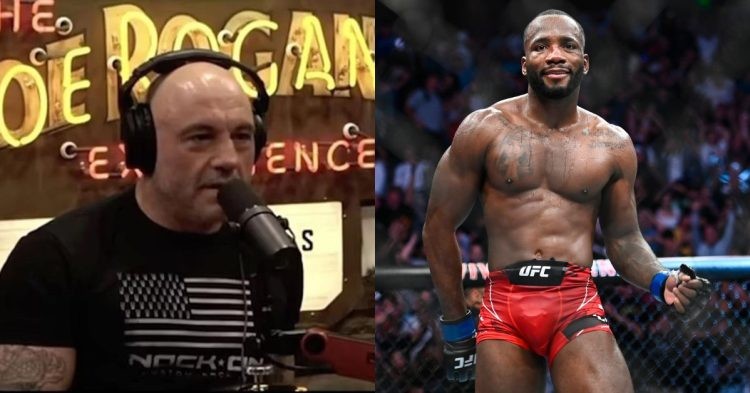 Veteran UFC Commentator and JRE host Joe Rogan, in a recent interview, talked about an incident that involved the current UFC Welterweight Champion Leon Edwards. Rogan spoke of the event on the ‘Joe Rogan Experience‘ explaining how he noticed a man insulting and ‘talking trash’ to Edwards.

Someone was talking shit to Leon Edwards, and Joe Rogan saved thempic.twitter.com/3KWFu490M7

Rogan talks about how he warned the man concerned, of the consequences he could be facing. And the consequences indeed could’ve turned out to be dire for him, as Edwards is a certified killer and one of the best pound-for-pound fighters in the world at the moment. Rogan spoke:

“Some guy was talking sh*t to Leon Edwards and I said you are making a critical mistake, lemme just step in right here, first of all you’re out of line and you’re being a sh*thead to him for no f**king reason and you’re picking the wrong dude. I mean that is one of the best fighters on planet earth”

Leon Edwards recently won the welterweight strap by knocking out the pound-for-pound number one fighter Kamaru Usman. The victory came in the fifth and final round in which Usman was cruising to a comfortable decision.

Having beaten the pound-for-pound number one in Kamaru Usman, it’s only fair that this question is raised by the fans and critics alike.

The rankings however, are not based off of a single loss or a single victory. It takes a lot of consistency and hard work to get on the list, let alone getting at the top of it. This has been seen multiple times whenever an upset has occured.

Kamaru Usman has wins over some of the best welterweights in the world such as Colby Covington, Jorge Masvidal, Gilbert Burns, Demian Maia, Tyron Woodley and the list goes on. On the other hand, Leon Edwards lacks the big names in his welterweight resume.

The presence of other contenders for the spot is also an important factor. One victory over the pound for pound number one cannot erase the consistency fighters like the current number one Alexander ‘The Great’ Volkanovski have shown in their respective divisions.

Leon Edwards will have to defend his title a number of times before he lays claim on the P4P 1 spot. And his reign as the title will be challenged soon by Kamaru Usman in the trilogy.