“You Call Yourself a Fighter?”- Michael Chandler Calls Out Justin Gaethje For Declining to Fight Him 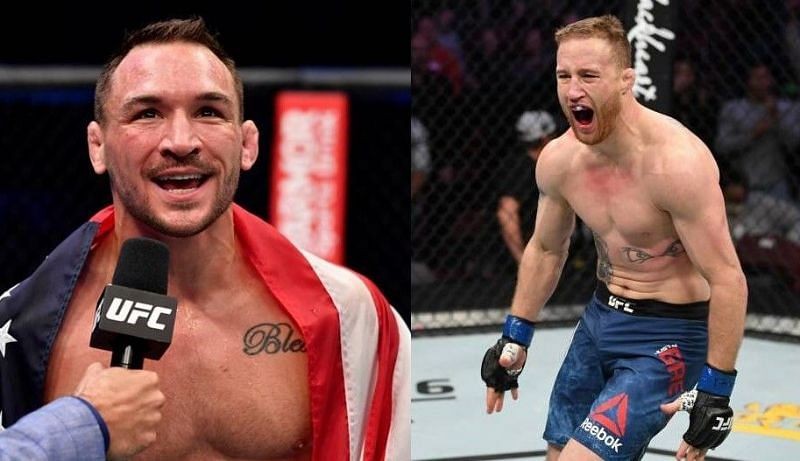 The UFC lightweight division is stacked with some of the biggest names in MMA. Dustin Poirier, Charles Oliveira, Conor McGregor, Justin Gaethje, Michael Chandler, and the list goes on.

There are many matchups in the lightweight division, which the fans would love to see next. And a 5 round war between Michael Chandler and Justin Gaethje is certainly one of them.

Both Michael Chandler and Charles Oliveira are two of the most exciting lightweights with devastating knockout power. So if these two face each other inside the octagon then it’s guaranteed to be an entertaining fight. However, it seems Gaethje and his camp are not too excited to face the former Bellator lightweight champion.

In a recent IG live, Michael Chandler claimed that Justin Gaethje has declined to fight him multiple times. Talking about a potential fight with Gaethje, Chandler stated:

“Gaethje should be next. There is no doubt about it. There is no secret that he(Islam Makhachev) and Gaethje share the same management so obviously, that management would love to say throw Islam on the trail. So it takes the heat of Gaethje. But Justin Gaethje, come on bro, you call yourself a fighter and you are. You are one of the exciting guys in mixed martial arts. Be prepared to make a highlight or be made a highlight. That’s what I am ready to do.”

Justin Gaethje has been avoiding the Michael Chandler fight

Michael Chandler also stated that UFC has offered Gaethje to fight him multiple times but Gaethje and his camp have declined to fight him so far.

“I have said Justin Gaethje’s name no less than 100 times since I have signed with the organization. He has been asked to fight me 3 or 4 different times. Every time he has declined. He and I are ranked two spots away from each other. He has not fought since last October. he needs a fight. For some reason, he and his camp have no interest in fighting me.”

Justin Gaethje last fought in October 2019 against Khabib Nurmagomedov. The reason why Gaethje is wasting his prime years and not being active inside the octagon is still unclear. It is possible that Gaethje wants to fight for the lightweight title next. However, it’s unlikely that he will get a title shot right away coming off a loss to Khabib Nurmagomedov.

Also Read: How similar are Khabib Nurmagomedov and Islam Makhachev?

What are your thoughts on Justin Gaethje avoiding the Michael Chandler matchup? Who should he fight next if not Chandler?

“He Has Comeback From a Lot”- Michael Chandler Firmly Believes Conor McGregor Will Return, Calls Him the “King of Promotion”