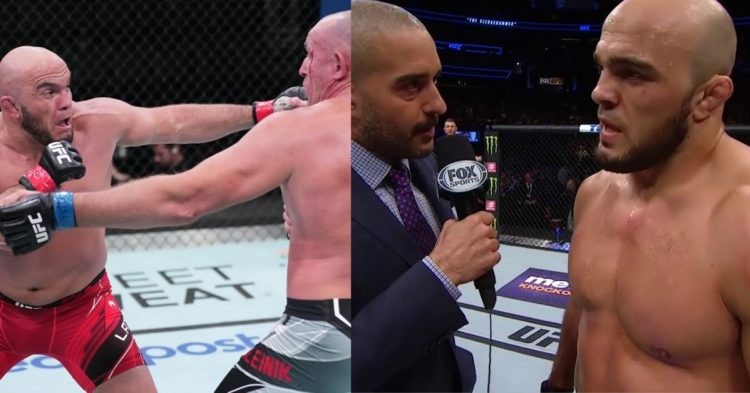 Ilir Latifi took on the veteran Aleksei Oleinik in a heavyweight bout on the UFC Vegas 61 card. ‘The Sledgehammer’ won, scoring a dominant decision win over Oleinik, getting the better of the veteran both on the feet and on the ground.

Latifi took down ‘The Boa Constrictor’ early in the first round and spent a considerable duration in top control. Being the younger fighter, Latifi was also visibly faster on the feet than his veteran opponent. As such, Ilir landed more than Oleinik throughout the bout, actively pressing him against the cage at regular intervals and scoring takedowns as well.

In his post-fight octagon interview, Latifi urged Mark Zuckerberg, who was present cageside, to throw in a bonus. “I know Mark from Facebook is here. You can throw in a bonus too, you know? Help us out,” Ilir Latifi said after beating Aleksei Oleinik.

As expected, there were also mixed reactions from fighters and media members online. A lot of people were not happy with the card becoming a private event for one of the richest people on earth. Notably, UFC President Dana White banned the media and press from the event and shut down claims that Mark Zuckerberg would be in attendance.

Most importantly, media members not being allowed means that the post-fight press conference and media scrums were also scrapped. As such, this lessens the exposure and spotlight the fighters would’ve otherwise received during the event.

Previously, Strawweight contender Mackenzie Dern revealed in the pre-fight media interview that Facebook CEO Mark Zuckerberg had rented the entire arena to watch the event. As it turns out, Dern’s comments were not very far from the truth.

Naturally, fight fans were annoyed with the UFC President lying and took to social media to express their frustration. These were some of the tweets from fight fans reacting to Mark Zuckerberg attending the UFC Fight Night event.

Yes, who of us hasn’t bought out an entire arena to watch athletes bludgeon themselves while we can’t be bothered to be among the unwashed masses?
I’d say for most of us the lap of luxury involves buying brown mustard. https://t.co/nfxK0WhjaJ