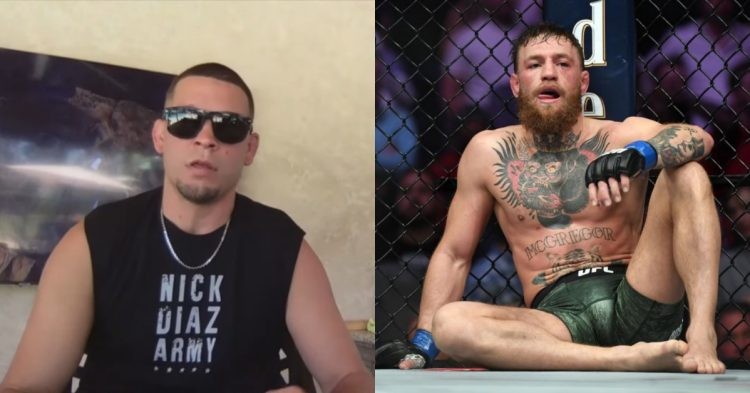 Nate Diaz recently appeared on The MMA Hour and revealed why the UFC is not letting him out of the contract. According to the younger Diaz brother, the company wants him to finish his trilogy with Conor McGregor before cutting ties with the company. However, Nate has no intentions of fighting Conor right now.

The 37-year-old was in talks to fight Dustin Poirier at the beginning of 2022. Although it seemed like the fight was heading in the right direction, the UFC ultimately did not show much interest in it. After that, Nate asked to be released multiple times throughout the year. But the company did not respond to Diaz’s requests.

The fans wondered why the company kept Diaz despite his recent record and inactivity. Diaz has finally revealed the reason. Apparently, UFC is pushing Nate to welcome Conor back to the Octagon once The Notorious One recovers from his leg injury. But Nate does not want to comply with UFC’s demands as he feels the timing is not right.

“[UFC] Don’t want to let me out of this contract because they want me to fight Conor. They Don’t want me out without finishing that fight up. I’m not fighting Conor McGregor right now. Our timelines aren’t matching up.”

“You didn’t fight me when you were supposed to fight me, I’m not fighting you right now. I’m supposed to bring you back to life before I go? You bring yourself back to life and then I’ll be back later. I got s*** to do.” (h/t via MMA FIGHTING)

At UFC 264, Conor McGregor suffered a brutal injury which ruled him out of action for more than a year now. Prior to that, he suffered the very first knockout loss of his career at the hands of Dustin Poirier at UFC 257. From Nate’s point of view, he does not want to give Conor the platform to make a big comeback. Although the McGregor trilogy promises to be a big-money fight, Nate wants no part of it.

It does not even look like Nate wants any more money either. In the past, the Diaz brothers have clashed heads with the company because of the amount of their pay. Apparently, the UFC offered him the most amount of money in the history of the company. However, Nate turned it down because he is completely burnt out.

Is there a future for Nate Diaz in the UFC?

Nate Diaz last fought Leon Edwards at UFC 263 in June of 2021. Since 2016, Diaz has fought only 4 times and has a record of 1-3 in his last 4 fights in the UFC. However, the company still has Nate under the contract. Although he only has 1 more fight left in his contract, the company is yet to book an opponent for him.

UFC President Dana White recently stated that he does not think Diaz is an integral part of the UFC anymore. He even went one step forward and added that Nate should fight Jake Paul. But the company is yet to take any meaningful step toward making the fight happen.

During the interview with Ariel Helwani, Nate revealed that he asked to fight Vicente Luque, Dustin Poirier and Tony Ferguson. But the company declined him the opportunity to fight any of those opponents. Instead, they offered Nate the Khamzat Chimaev fight. Although Nate was apprehensive in the beginning, he eventually came around to the idea and wanted to fight Chimaev.

Nate also revealed that he has been unhappy with his situation in the UFC since 2012. It is very apparent that Nate is not enjoying his time in the UFC anymore. He wants to explore his options outside the promotion. But he did not shut the doors on a trilogy bout against Conor McGregor completely. However, he wants to do other things at this very moment of his career.

What do you make of Nate Diaz’s recent comments on the situation? Do you feel like he is making the right move by turning down the trilogy bout against McGregor? If so, where do you think Nate goes next? Let us know your thoughts on the matter in the comments section below.