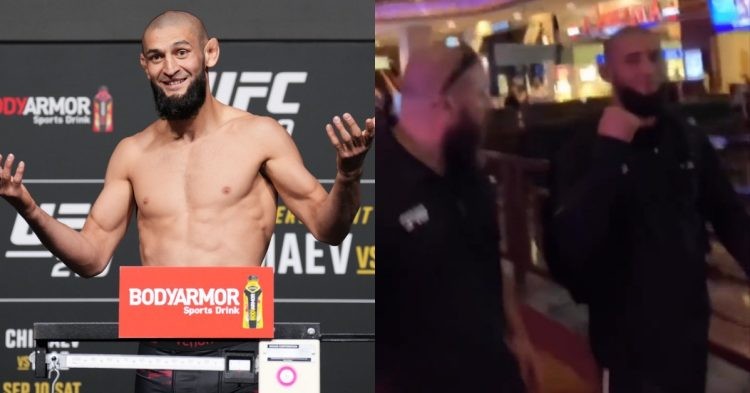 Khamzat Chimaev just can not catch a break it seems like! The whole UFC 279 fight week was riddled with headlines regarding Chimaev’s misdeeds. His altercation against Kevin Holland or the heated argument against Paulo Costa, everything that he did, garnered a lot of negative press. But the worst offence of the entire fight week was missing weight for the main event.

Not only did Chimaev miss the weight, but Khamzat missed the weight by 7.5lbs! It meant that the main event fell through and Tony Ferguson had to step up to replace him against Nate Diaz. But Khamzat still fought on the card as he took on Kevin Holland. The Borz was already angry about not being a part of the main event. He took it out on Holland, whom he submitted in the very first round.

Although it seemed like Chimaev was ready to move on from the incident, a recent video suggests otherwise.

A fan decided to follow Khamzat after the fight and started recording the incident on his phone. He then started shouting loudly, “You didn’t make weight!” One person from Chimaev’s entourage then plucked off the phone from the fan and slammed it on the ground.

The 28-year-old was booed heavily following his fight against Kevin Holland. Although Chimaev ran through his opponent on the night, the fans were not impressed. Khamzat’s weight-miss certainly left a bad taste and this particular incident is a big proof of that. Fortunately, Khamzat himself did not react to the incident. Otherwise, the situation would have been much worse.

Following his win against Kevin Holland in the co-main event of UFC 279, Khamzat Chimaev stated that he did not cut weight because of the UFC doctors. According to Khamzat, UFC physicians came to him at 4 in the morning and asked him to stop cutting weight. But that may not have been the entire truth.

After the weight debacle, Khamzat’s head coach, Andreas Michael, spoke to ESPN and revealed why the 28-year-old did not make the weight limit of 171lbs. In the interview, Michael stated that Chimaev will certainly have a much better time at middleweight instead of draining himself to come down to welterweight. He detailed the horrors Chimaev went through the night before the weigh-ins.

“He was getting muscle spasms, shaking, vomiting, when he stood up, he was passing out. I was worried about him.”

Even prior to Chimaev’s weight miss, Michael stated that middleweight was a prominent feature of their future plans. However, it depended on how soon Khamzat got a hold of the 170lbs title. But it may change after what went down at UFC 279. If such a thing happens again, it will surely put an end to Chimaev’s dreams of grabbing the welterweight title.