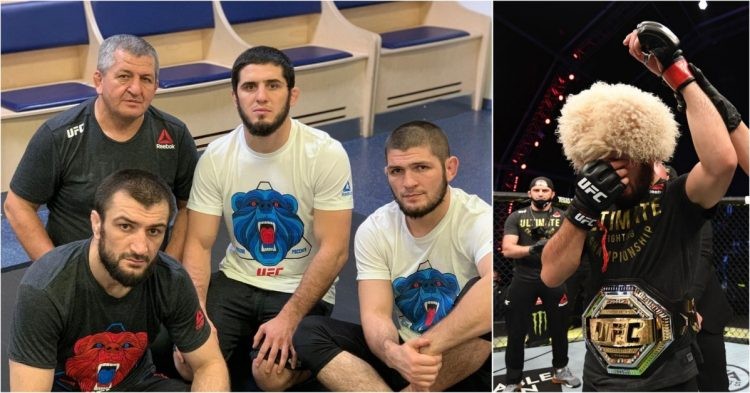 Most Mixed Martial Arts (MMA) fans know the story of Khabib Nurmagomedov and his father Abdulmanap Nurmagomedov. Abdulmanap is the man who trained Khabib and built him up to become a world-beater! Abdulmanap’s death is one of the reasons for his early retirement. However, his mother is also a big reason why he stopped fighting.

The Eagle recently attended an event in Canada, where he answered a lot of fan questions. He faced questions about his interest in coaching and also predicted the likeliest winner of the ongoing FIFA soccer World Cup 2022. However, the moderator also asked Nurmagomedov about his retirement and his mother’s role in the decision. As fans may remember, Khabib’s last fight was at UFC 254.

He fought against Justin Gaethje at the event and it was his third title defense. Khabib submitted Gaethje in the main event of the PPV and announced his retirement afterward. During his post-fight interview, Khabib revealed that he promised his mother that he will not fight again. Later, UFC President Dana White tried his best to bring Khabib back, but the 34-year-old stayed true to his word.

Speaking about the incident Khabib added, “Because of I finish my career, because of I promise mother. That’s why this one question, discussion between me and my mother become very famous. But we have lot of different things who like people don’t know about this.”

Khabib Nurmagomedov explains the importance of his mother in his life

Family is very important to Khabib Nurmagomedov. As soon as he beat Justin Gaethje, Khabib broke down in tears and prayed to his father. Without his father in his corner, Khabib did not want to prolong his career inside the UFC Octagon. In absence of his father, Khabib is taking the best care of his mother. As per the former UFC champ, he is happy to be serving his mother’s needs.

“You know, and I know even like in Dagestan like this is not about Dagestan or not, I know lot of people, they have bad relationship with parents. And I really really don’t understand this. How can people have like bad relationships with parents like. And yes, mother for me, is everything. Even now, she is still with me, living with me, like in same house and I treat her like queen.”

In October of this year, Khabib’s cousin Islam Makhachev became the second Dagestani UFC lightweight champ. Islam picked up from where Khabib left off and continued the family legacy. However, for UFC 280 the fight camp, Khabib paid close $1 million out of his own savings to give the fighters all the facilities they needed. American Kickboxing Academy coach Javier Mendez lauded Khabib for his selflessness.

Even recently, Khabib could not join Usman Nurmagomedov for his title fight against Patricky Pitbull. But Nurmagomedov caught the contest on TV and called in to congratulate his young cousin on his victory.

Hence, it is clear that Khabib has no interest in having any fights at present or in the near future. He is honoring the promise to his mother and helping the younger generation instead of risking his own health.

Nurmagomedov has a brother named Magomed and a sister named Amina. Khabib is married to Patimat Nurmagomedov and they reside in Dagestan. But other details regarding his personal life are not available to the public.