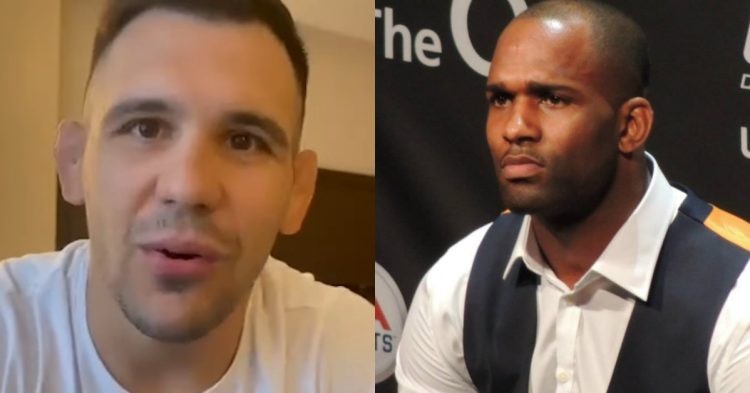 Aleksandar Rakic claims that Jimi Manuwa tried to sucker punched him. (Images via The MacLife YouTube Channel and Twitter)

Aleksandar Rakic reveals that Jimi Manuwa attacked him at UFC London. In a recently released video, Rakic alleged that Manuwa tried to sucker punch the Austrian fighter after they were in close proximity following the Fight Night event in London.

As the fans may know, retired UFC veteran Jimi Manuwa is currently situated in London. So it was not surprising to see him at UFC London. But the magnitude of the event was so big that MMA stars from all around the world showed up for the card. Amongst them was UFC light heavyweight fighter Aleksandar Rakic.

Manuwa and Rakic previously crossed paths on June 1st of 2019. After suffering 3 straight losses, Manuwa was in desperate need of a win. Instead, Rakic knocked him out in the very first round of their contest, which forced Jimi to retire. According to Rakic, Manuwa held a grudge against him for it and decided to get payback by attacking him.

“Jimi Manuwa, you piece of sh**. You son of b*tch man. What a p**** move you did last night on me. Guys, I wanna just let you know that after the event at UFC London, the security is escorting me to the transfer to the hotel, back to the hotel. And Mr Stillsleep was sitting in my row, at the end of the row.”

“So I needed to pass him by. And I passed by and he talked to me something. I didn’t really pay attention first and the second, I have nothing to do with that guy. You know, for me, this is over. So I start to turn away and he sucker punched me and even in that close range, he couldn’t catch my head. I think he hit me with forearm on my neck.”

The 30-year-old also accused that Jimi knew he had surgery recently which left him unable to fight. On top of that, Rakic was alone in London to watch the fight. Hence Rakic thinks that Jimi tried to take advantage of it by catching him off-guard.

Aleksandar Rakic mentioned in his video that Jimi Manuva tried to say something to him that he did not pay attention to. So there remains a possibility that the whole incident was caused because of a misunderstanding. Maybe Manuwa tried to exchange pleasantries which Rakic ignored. Manuwa may have taken it as a sign of disrespect and swang at his former opponent.

However, that is just a theory and nothing has been proven yet. But Rakic seems to think that Manuwa attacked him because of their past. Aleksandar did humiliate Manuwa by knocking him out in less than a minute with a head kick. So the possibility of Jimi wanting vengeance for that may not be out of the question as well. But it does not seem like Rakic has pressed charges against Jimi.

A scuffle between fighters in a London event is not uncommon. In 2019, Jorge Masvidal and Leon Edwards got into a brawl following Masvidal’s victory over Darren Till in the same O2 Arena. It seems like this altercation between Rakic and Manuwa will go down as another such occasion.