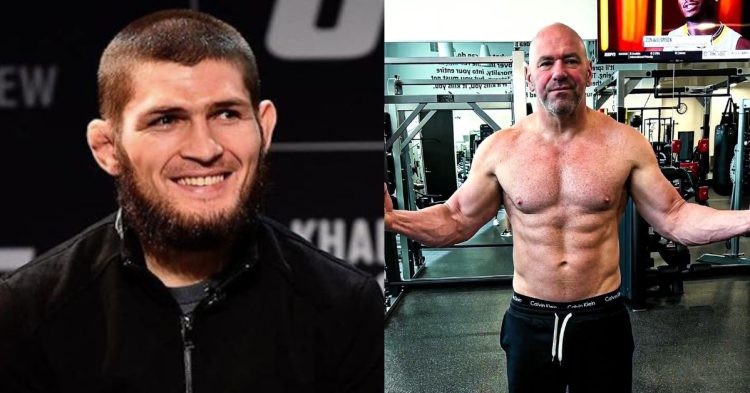 UFC 280 was one of the most exciting PPVs of this year, and UFC president Dana White made sure to make this event the most stacked-up card. At the ceremonial weigh-ins, White met the former lightweight champ, Khabib Nurmagomedov.

In a video uploaded to Instagram, ‘The Eagle’ was seen having a friendly encounter with the UFC president. Nurmagomedov was there along with Islam Makhachev. While Makhachev was doing the usual weigh-in, Nurmagomedov made some remarks about White’s weight.

Nurmagomedov hugged White and said: “You look so skinny.” White also greeted ‘The Eagle’ while Nurmagomedov said jokingly: “Now me and you the same weight.”

Both men have been close friends for a long time and this encounter shows that the respect between them is still intact. Nurmagomedov is known for his humble persona despite his dominant and fierce performances inside the octagon.

On the other hand, White has had a drastic transformation since he adopted his new diet and workout plan. The UFC president has lost some weight and looks very fit. White was recently informed that he had about ten years to live and to change that he has to make a few improvements hence he is now following a strict regime.

According to Dana White, he had only 10.4 years to live, however, he doesn’t have any life-threatening illness. The UFC president disclosed in a podcast that he changed his way of living after meeting Gary Brecka, a human biologist.

After doing some tests, Brecka informed White that he needed to adjust his eating habits and exercise routine immediately to increase his life expectancy. As per Dana, he had problems with his legs and sleeping routine. But since adapting to Brecka’s strategy his life changed drastically. In the podcast, White said:

In the podcast, White said: “I’m on the keto diet. This is what Gary Brecka told me there are essential fats that your body needs or you’ll die. There are essential amino acids, there is no such thing as an essential carbohydrate. I’ve never felt better. I feel like I’m 35 years old again.”

White is on a ketogenic diet now and is living a healthier life. He also stated that he lost 30 lbs in ten weeks and several of his underlying health problems are gone now. White seems to be doing much better than he was before and we hope to see him continue that further.