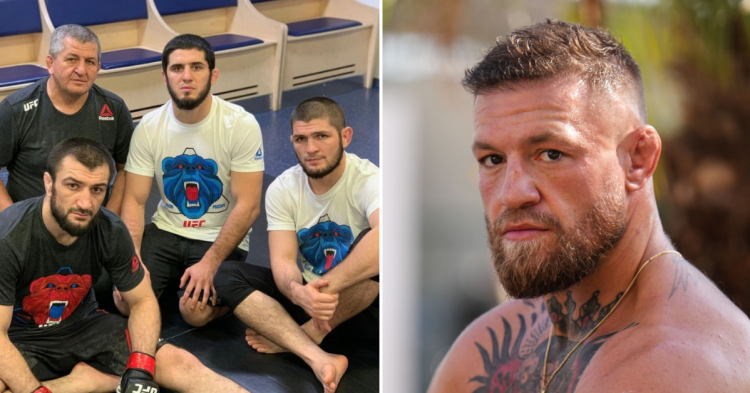 Conor McGregor has hit back at Khabib Nurmagomedov who took a subtle jibe at the Notorious in a recent interaction with the media in Toronto.

“It was a clean sweep for the Irish. I said it last year, we are not here to take part, we are here to take over.” McGregor announced back in 2014.

“But we are here to take over!” – Khabib Nurmagomedov pic.twitter.com/wvR4RKKs8J

The Dagestani camp has truly taken over the world of mixed martial arts and Khabib Nurmagomedov did not fail to remind the world about it by using McGregor’s own words.

Attacking Khabib Nurmagomedov for his decision to retire, Conor McGregor hit back at the Dagestani fighter for his “fear of defeat”. Taking a jibe at Nurmagomedov for not fulfilling his father’s plan, often noted to Abdulmanap Nurmagomedov’s desire to see Khabib retire with a perfect 30-0 record, the Notorious called him out for a rematch.

Khabib Nurmagomedov retired with a perfect record of 29-0 back at UFC 254 following a second-round submission win over Justin Gaethje in Abu Dhabi.

I fight on! Your fathers plan is never complete because you quit and ran, brother. God bless. I’m still here if you wanna go again. But your fear of defeat means you’ve already lost. Run from it all you want. We all lose in the end. Death takes us all. I fear nothing but God 🙏☘️ https://t.co/nfpfoTwxli

The rivalry between Khabib Nurmagomedov and Conor McGregor is arguably one of the greatest of all time. The duo shared the UFC Octagon back at UFC 229 on a historic night for UFC fans around the world. The much anticipated PPV drew in a record 2.4 million PPV buys and shattered all UFC records.

Nurmagomedov has maintained that he is not coming out of retirement. Earlier, there were reports that we could see Khabib back inside the Octagon for another fight with Georges St-Pierre, however, even that has not come to fruition.

Former UFC Lightweight Champion had also agreed to coach The Ultimate Fighter with Tony Ferguson but even that has not reached anywhere. It won’t be wrong to say that fans have almost given up on the idea of watching KHabib Nurmagomedov compete inside the Octagon once again.

Be that as it may, it doesn’t look like the verbal spat between Khabib and Conor is going to stop anytime soon.