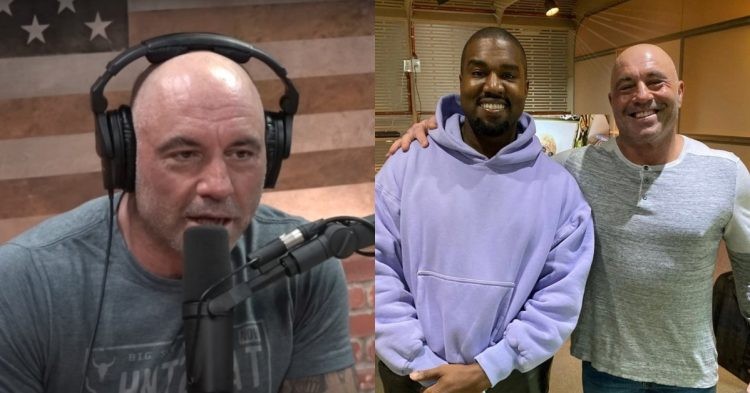 Kanye West is a polarising figure. West is revered for his music. However, he is facing a lot of criticism as of late. While West made some outlandish comments in the past, his anti-semitic rant on the Jewish community is facing a lot of backlashes.

But controversy is nothing new for Kanye. He always had an edge to his character. However, West’s behaviour has been undesirable for quite some time. The 45-year-old had bouts of depression in the past. Although he did seek help, Kanye did not want to rely on prescribed medicine. But things got worse in the last couple of years.

His recent controversy has also impacted his bottom line. Reports came out recently, Adidas terminated its contract with Kanye West. The German footwear company will stop distributing Kanye’s Yeezy, effective immediately. As a result, West can no longer call himself a billionaire. The cancellation of the deal cost him $1.5 billion. According to Forbes, Kanye now is worth $400 million.

What did Joe Rogan say about Kanye West in 2020?

Despite his public stigma, one person that did not judge Kanye was Joe Rogan. Rogan reached out to him publicly and offered him a chance to be a guest on his podcast, ‘The Joe Rogan Experience.’ Although Joe initially addressed Kanye in 2018, the rapper did not appear on his podcast until 2020.

The podcast gave the fans an insight into Kanye’s mind. During the almost 3-hour conversation, Ye opened up to Rogan and discussed his ideas. Following that, Rogan defended the hip-hop artist and claimed that only a few statements are not enough to make any assumptions about Kanye. So what did Rogan really say?

“You’re missing who he really he is, who he really is, is him all day. It’s not him in this 30 second chunk where you don’t like what he said. Guess what? He probably doesn’t like what he said either, okay? He’s f***ing streaming. He’s just going, he’s running with these thoughts and ideas. But that is also why he can boil those thoughts and ideas down to these amazing f***ing songs.”

“That’s what I wanted to get out of him, while we were talking. Cause people were trying to medicate him, and people were trying to (tame him). And I’m like, if you have a choice between this medicated, overweight Kanye, who doesn’t get anything done, or manic crazy Kanye (who) says wild sh*t. You want manic, crazy Kanye. Cause manic, crazy Kanye is the one who makes great music. And I have been around him, he’s a nice guy man. He’s a really genuinely nice guy.”

However, Rogan’s comments are from 2020, prior to West’s recent rants. The UFC commentator is known for providing a platform to people who want to make a point. But the 55-year-old did not endorse West’s views. He merely gave Kanye an opportunity to share his views with the world. But the famous UFC commentator did not issue a statement on the recent controversies.

What are your thoughts on the matter? Do you think Joe Rogan will once again have Kanye West as a guest on his podcast? Let us know in the comments down below.