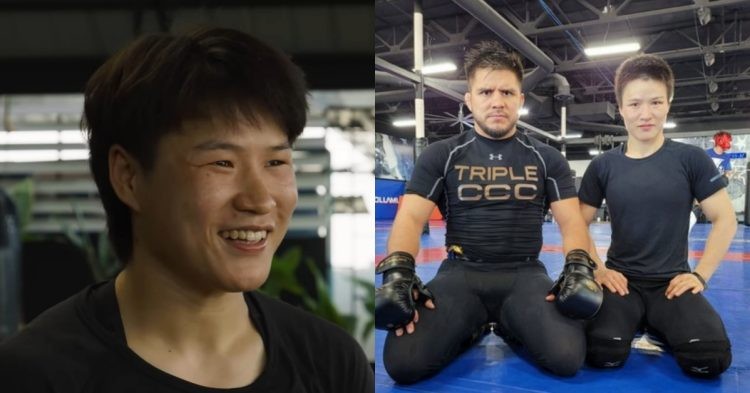 Zhang Weili makes big changes to her training camp ahead of her UFC return this weekend. She held her training camp in Phuket. For her last fight against Rose Namajunas at UFC 268, Weili trained with former UFC double champ Henry Cejudo. However, this time around, Zhang has decided to go at it solo.

She is set to take on Joanna Jedrzejczyk in the upcoming UFC 275. They previously faced off at UFC 248, albeit under different circumstances. Going into the first bout, Weili’s stock was at an all-time high. She had just become the first Chinese fighter to capture a UFC title and there were big hopes to turn her into one of the biggest stars in the company.

However, things are much different ahead of the rematch. While Joanna has been inactive for 2 years, Zhang is coming off of 2 back to back losses against Rose Namajunas. The first loss was a result of a flash knockout but the second loss was much more heartbreaking. She trained with Henry Cejudo at Fight Ready for her last bout with Rose.

Although she had a much more compact performance, Zhang still fell short as Rose won the fight via the judges’ decision. Cejudo’s impact was visible on Weili as she seemed much more comfortable on the ground. But it seems like she is taking a different direction ahead of UFC 275.

In the latest countdown video for the upcoming UFC PPV, the 32-year-old revealed that she is in Thailand to hold her training camp. Although Zhang had the option to go to Tiger Muay Thai which is located in the same location, she has opted for a much quieter place to train. Weili revealed,

“This is a new boxing gym. There are less people here. It allows us to do a better job at keeping our training confidential. I have been enhancing my speed and strength, as well as my boxing skills.”

Can Zhang Weili get a title shot after UFC 275?

The UFC women’s strawweight division is in a very interesting place right now. Just when it seemed like the weight class has found a dominant champion in Rose Namajunas, she ended up losing the belt to Carla Esparza at UFC 274. In the last 5 years, the division has had 5 different champions including Magnum herself.

Weili is currently ranked no. 2 in the 115lbs division. Despite two high-profile losses, Zhang has managed to maintain a very high ranking. On top of that, she is yet to face Esparza during her run to the top of the division.

Hence a win over Joanna on Saturday may pave the way for another title fight for Zhang. A second win over the former champ Joanna will certainly make her argument much stronger.