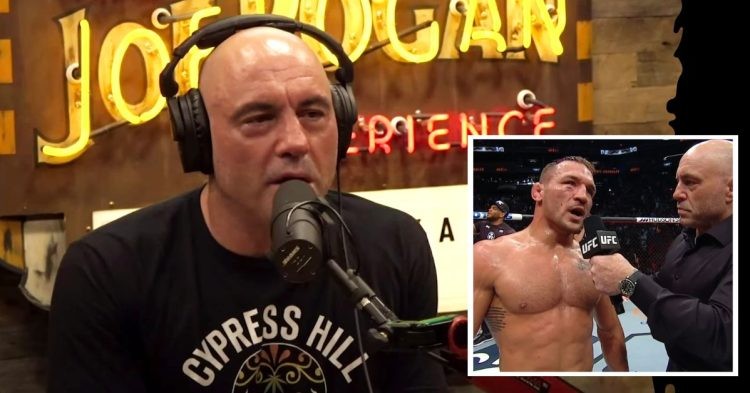 UFC post-fight Octagon interviews are a thing of beauty! After a brutal war inside the cage, listening to the fighters stake their claim inside the Octagon is nothing less than spectacular. There have been several such instances where fans remember the post-fight interview more than the fight, and the noise of the words still echoes large in the ears of mixed martial arts fans. Today, we take a look at Joe Rogan’s favorite post-fight Octagon interview, who has been a witness to some of the most incredible moments inside the Octagon.

Rogan was there when Nate Diaz called out Conor McGregor following his win over Michael Johnson, and he was there when Chael Sonnen delivered a fiery callout to Anderson Silva. Who can forget Joe Rogan amidst Daniel Cormier and Brock Lesnar when hell broke loose at UFC 226, or when Nick Diaz‘s “Where you are George?” sent shockwaves in the MMA community.

“When I interviewed him after that fight, it was the best ever post-fight speech I have ever heard in my entire life.” Rogan has said about Michael Chandler.

Above Khabib Nurmagomedov’s callout of “chicken” Conor McGregor, to the Notorious delivering some of the greatest moments inside the UFC Octagon, Joe Rogan has put Michael Chandler’s post-fight Octagon interview on the top of his list.

Joe Rogan interviewed Michael Chandler following his vicious KO win over Tony Ferguson, calling the front-kick KO the “best front-kick knockout” he has ever seen in his life.

While Rogan was not present during Chandler’s call-out following his debut win at UFC 257, the UFC commentator had a smile throughout as Chandler called out Conor McGregor, all the while demanding a rematch from Charles Oliveira and Justin Gaethje at UFC 274.

An aggressive Michael Chandler received a ton of support for his call-out of Conor McGregor, earning the support of mixed martial arts fans for his back-to-back entertaining performances.