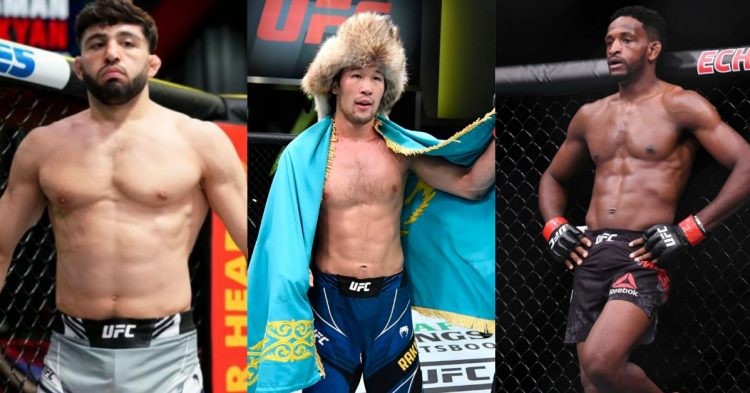 Songs Arman Tsarukyan, Shavkat Rakhmonov and Neil Mangy will use for their walkouts (Images via Twitter)

UFC Fight Night: Tsarukyan vs Gamrot will take place inside the Apex facility in Las Vegas. Lightweight fighter Arman Tsarukyan will headline the card alongside Mateusz Gamrot. This will be a good opportunity for both of them to show off their skills on the big stage.

Both Tsarukyan and Gamrot are amazing new talents in the 155lbs and an early opportunity to main-event an ESPN card will certainly give them exposure to a wide array of audiences. So will be the case for Shavkat Rakhmonov who fights Neil Magny in the co-main event of the night. As he looks to climb up the ranks of the welterweight division, a win this Saturday will be essential for his career.

The card will kick off with a middleweight bout between Rodolfo Vieira and Chris Curtis. It will be followed by a bantamweight fight between Nathan Maness and Umar Nurmagomedov. Heavyweight fighters Josh Parisian and Alan Baudot will also feature on the main card.

What songs will Arman Tsarukyan and Mateusz Gamrot use at UFC on ESPN 38?

Arman Tsarukyan is on a 5-fight win streak. The 25-year-old has been a very highly rated prospect in the lightweight division. His last bout came against Joel Alvarez in February of 2022. For that bout, the Armenian-Russian fighter came out to a traditional Armenian song “Yarkhusta“. He used the same song for his bout against Christos Giagos as well.

His opponent on June 25th, Mateusz Gamrot used the song called “My Songs Know what you did in the Dark” by an artist called Fall Out Boy. Gamrot was walked out to the same song from the Fall Out Boy for his bout against Jeremy Stephens in July of 2021.

Kazakh fighter Shavkat Rakhmonov has been an absolute bulldozer since he came into the UFC. With 3 wins in a row, Rakhmonov will be taking on Neil Magny in the most important bout of his career yet. For his debut at UFC 254 against Alex Oliveira, Rakhmonov walked out to “Aday” by Nurzhan Tazhikenov.

After using the same song for his next bout against Michel Prazeres, Rakhmonov used “Talent Zhumabaev” by Bizdin Eldin Zhigitteri for his bout against Carlston Harris.

For his Geoff Neal fight on May 8th in 2021, Neil Magny came out to “No Regrets” by Lecrae featuring Suzy Rock. But for his last bout against Max Griffin in March, Magny chose “Every Chance I Get” by DJ Khaled.

Shavkat Rakhmonov UFC Fight Purse: How Much Money Has “Nomad” Earned in His UFC Career?