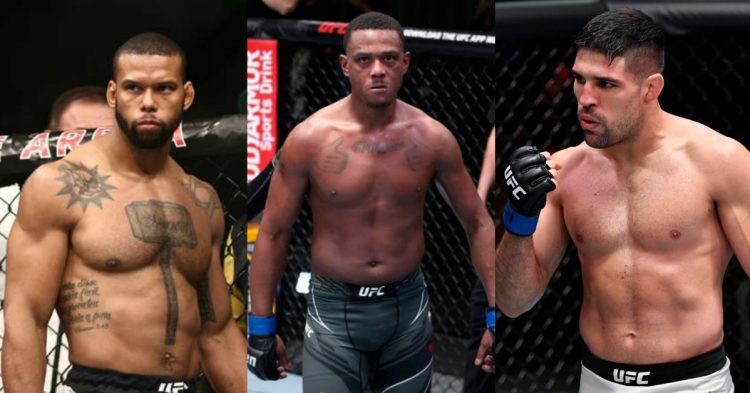 UFC is back in Apex after three back-to-back events on the road. The event will go down on August 6th and it will feature a light heavyweight fight in the main event. Former title challenger Thiago Santos will be going up against Jamahal Hill. It will be a battle between no. 6 (Santos) in the division against no. 10 (Hill).

Known for being one the most fearsome punchers in the division, Thiago Santos has hit a snag in recent times. He has lost 4 fights out of his last 5 since his injury. His bout against Jon Jones took a massive toll on Santos’ legs as he underwent massive reconstructive surgeries. Since then, Thiago has not been the same. So the bout against Hill is potentially one of the most significant of his career.

Jamahal Hill, on the other hand, has lost only one fight since coming into the company in 2020. He is currently on a two-fight win streak where he finished both Jimmy Crute and Johnny Walker via knockout. Hill is definitely on the rise, whereas Santos’ career is winding down. So it will be interesting to see how the bout plays out.

In the co-main event, welterweight fighters Vicente Luque and Geoff Neal will go head to head. Luque was on a 4-fight win streak before losing to Belal Muhammad in his last fight. His opponent this Saturday, Geoff Neal, beat Santiago Ponzinibbio in his last fight.

UFC on ESPN 40: Which songs did Thiago Santos and Jamahal Hill use?

Thiago Santos has a fixed song that he always uses for his walkouts. The song is titled “Marreta da cdd para o mundo” by an artist called Isaac Saradinho. It suits him as ‘Marreta’ is also his nickname.

Jamahal Hill is known for mixing up his walkout songs. For his last fight against Johnny Walker, he walked out to ‘Knife Talk’ by Drake. He walked out to ‘100 Shots’ by Young Dolph against Jimmy Crute in the fight before that.

UFC on ESPN 40: Which songs did Vicente Luque and Geoff Neal use?

For his main event fight in April against Belal Muhammad, Vicente Luque walked out to ‘Baby Baby’ by Troopkillaz. He has used the song for both of his fights against Michael Chiesa and Tyron Woodley at UFC 265 and UFC 260 respectively.