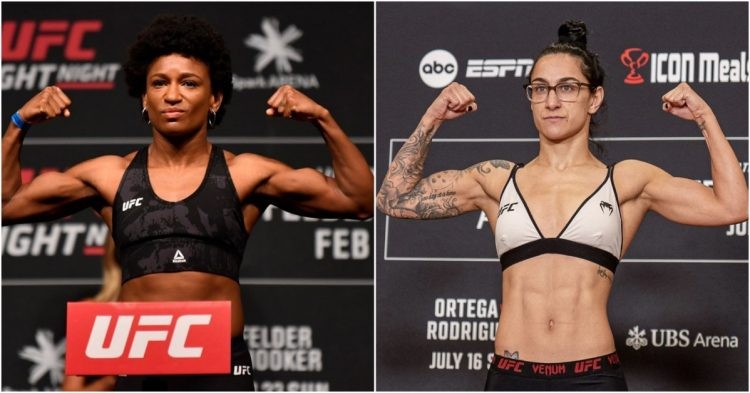 Angela Hill returns to action this weekend to fight Emily Ducote after breaking her long losing streak. She beat Lupita Godinez in her last fight in August. Prior to that, she lost 5 of her 6 fights! So Angela was definitely under a lot of pressure to get back in the win column. She defeated Godinez via decision, which definitely took a lot of pressure off her.

She is now scheduled to fight Emily Ducote in the prelims of UFC Orlando. Emily Ducote is on a 4-fight win streak and two of them came via stoppage. Her last fight was against Jessica Penne in July. She is the former Invicta women’s strawweight champ and defended it against Alesha Zappitella before her UFC debut.

The 115lbs division in the UFC is on fire right now! Zhang Weili submitted Carla Esparza at UFC 281 to become the new champ. However, Joanna Jędrzejczyk is not there anymore and there are doubts over Rose Namajunas’ future in the UFC. So, the division can use some fresh blood. Hence, Emily Ducote may turn out to be an exciting addition to the division.

Angela Lee (MMA record 14-12) has had 18 fights in the UFC with 10 losses and 8 wins. But, a lot of the losses were controversial because of the judging. Her losses against Cláudia Gadelha, Michelle Waterson, and Amanda Lemos were extremely debatable, as the bouts could easily have been scored in Hill’s favor. Although she is 37 years of age, Hill has shown no signs of slowing down.

However, Emily Ducote (MMA record 12-6) displayed amazing striking on her UFC debut. Against Jessica Penne, Ducote landed 7.73 strikes per minute and it accumulated to 116 total punches landed. On the other hand, she absorbed only 63 strikes in the fight. So it will be interesting to if she decides to keep the bout on her feet.

Historically, Angela Hill has struggled against fighters who have great grappling. In her career, Hill is yet to get a submission win. Hence, Emily Ducote will look to take the fight to the ground as soon as possible. If the former Invicta champ just trades punches against Hill, it may not end well. Hence, grappling will be Emily Ducote’s easiest path to a win.