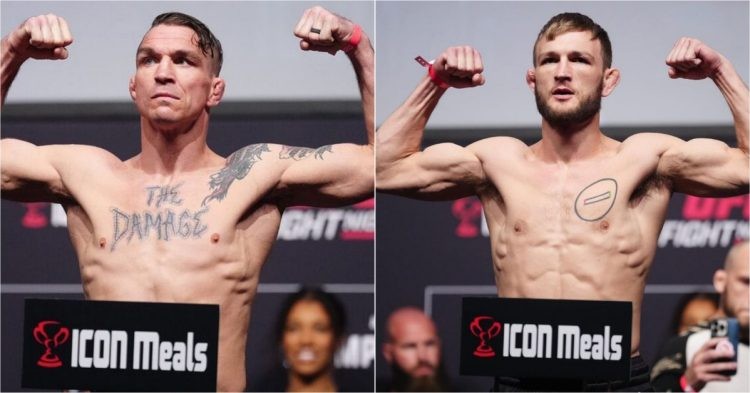 UFC Orlando is going to be one of the most exciting Fight Night cards in recent memory. While Stephen Thompson vs Kevin Holland will headline the main card, it will also feature several other fights. One of the most exciting match-ups, however, takes place in the prelims between Darren Elkins and Jonathan Pearce.

Jonathan Pearce’s last loss was against Joe Lauzon in 2019. Since then, JSP has beaten Kai Kamaka III, Omar Morales, Christian Rodriguez, and Makwan Amirkhani. Impressively, amongst his 4 wins, 3 have come via stoppages. So the 30-year-old is in a great place ahead of the bout this weekend.

But, his opponent on December 3rd is one of the most experienced fighters in the company. Darren Elkins has 26 fights in the UFC. Although he has gone on amazing win streaks in his career before, Elkins is at the latter stages of his career. Despite that, he has won 3 of his last 4 fights.

So, who wins between Darren Elkins and Jonathan Pearce this weekend? Let’s find out!

Can Elkins survive against Pearce at UFC Orlando?

Nicknamed ‘The Damage,’ Darren Elkins has been fighting in the UFC since 2010. Although he has endured some big losses against the likes of Alexander Volkanovski and Charles Oliveira, Elkins has managed to rack up a significant number of wins. He has a UFC record of 17-9. Although he has never fought for a belt, Elkins has maintained a great CV.

As per UFC stats, Elkins has a takedown average of 2.76 per fight, while landing 3.52 strikes per minute. Although his blood and guts performances have earned him 9 KO wins, Elkins is also quite the craftsman on the mat and he has secured 5 submissions as well. Although Jonathan Pearce has much fewer fights, JSP also has 9 KO wins to his name. It proves that the American fighter does not like taking the bout to the judges’ cards.

But, that does not mean that the 30-year-old is only a striker. Alongside averaging 5.78 strikes per minute, JSP also lands 6.75 takedowns per fight. There is never time to breathe for his opponents, as Jonathan Pearce is always pushing the pace on his opponents.

Darren Elkins has certainly had a great run in the UFC. Not many can claim that they have fought in the UFC for almost 13 years. Even at an advanced age, Elkins finds a way to channel his veteran experience and come out on top. But Pearce is 8 years younger and has the height advantage. So JSP will definitely be the favorite to win the bout.