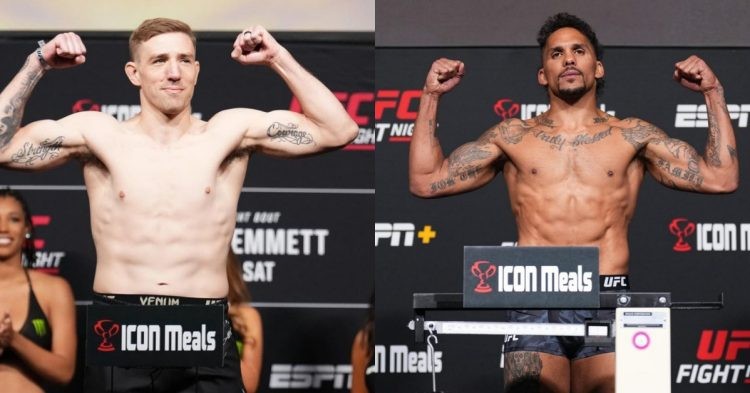 Eryk Anders vs Kyle Daukaus will kick off UFC Orlando this weekend. Unlike recent UFC fight night events in Apex, this card will have a full-capacity crowd inside Amway Center in Orlando. The main event of the night will see Kevin Holland vs Stephen Thompson in the welterweight division.

But the focus will be on the middleweight division for the opening bout of the night. Eryk Anders (MMA Record 14-7) will fight Kyle Daukaus in an exciting matchup. Eryk is currently on a 2-fight losing streak as he lost to Park Jun-Yong via split decision and André Muniz via submission.

Kyle Daukaus (MMA record 11-3) is also coming off a loss. His last bout was against Roman Dolidze, who fights Jack Hermansson on the same card. The contest ended with Dolidze handing Daukaus a vicious KO loss. Before that, Daukaus submitted Jamie Pickett in February 2022.

So both fighters are in a spot of bother in their respective UFC careers at this point. Anders has a UFC record of 6 wins, 7 losses, and 1 no-contest. Daukaus, on the other hand, has won 2 UFC fights, lost 3, and 1 ended in a no-contest. So, who gets back in the win column this Saturday? Let’s break down the fight.

Kyle Daukaus is a prolific submission artist. Out of his 11 wins, Kyle has 9 submissions in his career. But Eryk Anders’ resume suggests that his skill sets are completely opposite of Kyle’s. Anders has 8 KO wins in his career. So the winner of this bout will depend on who gets to implement their skills better.

Nicknamed ‘Ya Boi,’ Andres has done quite well for himself against grapplers. He only has 1 submission loss in his career. But, Eryk has also beaten grapplers like Gerald Meerschaert. So the task for Daukaus is going to be extremely tough. The 29-year-old is coming off a brutal KO loss. Can his chin handle Andres’ powerful strikes?

But, Kyle will have the tools to avoid getting hit, by securing early takedowns. He averages 2.36 takedowns per bout and attempts 2.1 submissions on average. But, Eryk Anders has a takedown defense of 75%. On top of that, Eryk lands 3.26 strikes per minute on average. Although he absorbs more than 4 strikes per minute in return, trading shots with him will not be a good idea for Kyle.

Both Eryk and Kyle were undefeated before entering the promotion. However, both have encountered some bad losses in their UFC run. Another defeat may prove to be their last fight in the current UFC run for the time being. From the stats above, it does appear that Eryk Anders will be the one to get his hand raised this Saturday.