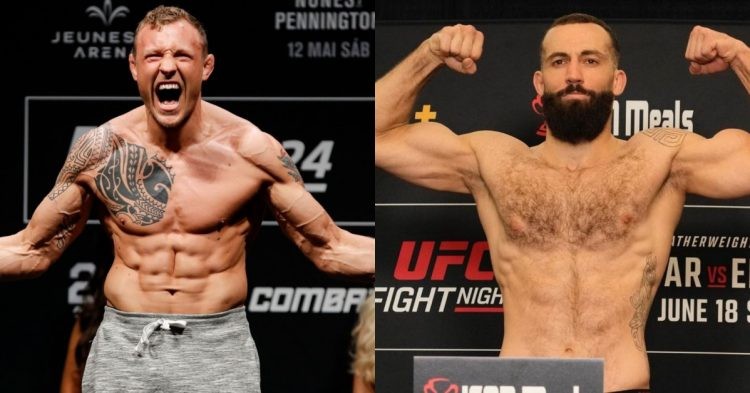 Jack Hermansson is set to fight Roman Dolidze on the main card of UFC Orlando. Hermansson still holds a place inside the Top 10 of the middleweight division. But his opponent, Dolidze, is yet to be ranked in the division. So it seems like a big test for Roman, who will face a ranked UFC opponent for the first time in his career. So it will be an exciting bout to watch this weekend.

Roman Dolidze (MMA record 11-1) has had a fascinating career so far. He started his career in the heavyweight division. But he moved down to light heavyweight in his second pro MMA fight. At 205 lbs, Roman won the WWFC title in 2018. He also defended the belt once before moving to the UFC.

In the UFC, he got off to a great start as he beat Khadis Ibragimov via TKO and John Allan via decision. But, he suffered his first career loss against Trevin Giles in March 2021. But, since that loss, Roman beat Laureano Staropoli, Kyle Daukaus, and Phil Hawes. The win against Hawes was especially brutal as Roman damaged Phil’s leg severely before knocking him out cold.

Hermansson (MMA record 23-7), on the other hand, beat Chris Curtis in his last bout at UFC London this July. He was set to face Darren Till for the event. But, the Brit pulled out of the bout for injury purposes. Even for this event, Jack was set to fight Derek Brunson. But Derek withdrew from the fight. So it is a big risk for Jack to be fighting an unranked fighter like Roman. However, Jack did not hesitate to accept it.

Can Dolidze pull off a big win against Hermansson at UFC Orlando?

Jack Hermansson and Roman Dolidze, both are excellent grapplers with handy striking. Jack The Joker has traded wins and losses in his last 7 fights with 3 losses and 4 wins. He has a UFC record of 10 wins and 5 losses. He also has 3 KO/TKOs and 3 submissions. Jack’s overall record consists of 11 KOs in total and 6 submissions. So Hermansson is extremely well-rounded in his abilities.

Hermansson stays busy inside the Octagon with 5.14 strikes per minute and only absorbs 3.74 strikes. But the 34-year-old also has a good takedown average of 1.57 per fight. Along with his takedowns, he also holds a takedown defense of 75%. Although there are some questions regarding his chin, Jack does not struggle against strikers who are not extremely powerful.

Compared to Hermansson, Roman Dolidze is more focused on his wrestling. The 34-year-old lands 2.47 takedowns per fight and only lands 2.60 strikes per minute during his fights. He is also a big submission threat, as Dolidze attempts 1.6 submission holds in each of his fights on average. Roman is an ADCC champ and holds 3 submissions in his career.

Although both are around the same age, Jack Hermansson has much more mileage on his body. Roman Dolidze is much younger in the sport and he has built up a good win streak in the UFC. Jack, on the other hand, has been inconsistent in recent years. Even though the Swedish fighter will be the favorite to win, fans should not be shocked to see Dolidze pull off an upset.