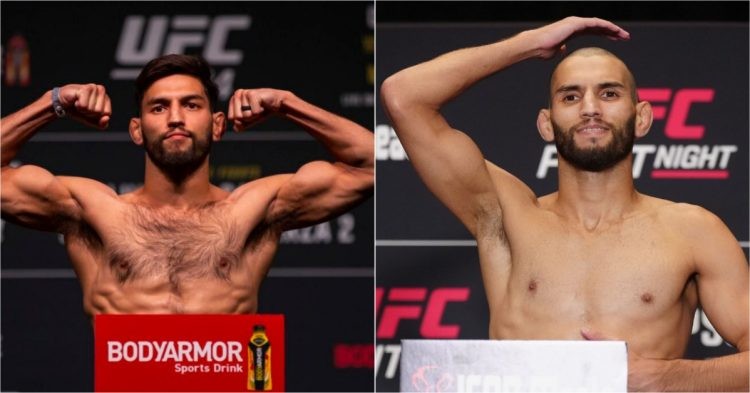 UFC Orlando will feature a flyweight bout between Matheus Nicolau and Matt Schnell. While the former is ranked 6th in the UFC men’s flyweight division, the latter is ranked just one spot behind him at 7th. The winner of this fight will get a Top 5 opponent after this and that may lead to a championship opportunity soon after.

During the weigh-ins for the bout, Matt Schnell initially missed weight by 0.5 lbs. However, he cut off all of his hair to make the weight for the bout. So there are questions if he had the smoothest weight cut or not. In his last 5 fights, Schnell has a record of 2 wins, 2 losses, and 1 no-contest. Although he beat Su Mudaerji in his last bout, there are question marks over his recent form.

Matheus Nicolau (MMA record 18-3-1) is on his second run in the UFC. Compared to Matt Schnell, Nicolau has had a much better run. Since rejoining the promotion, Nicolau has won 3 successive fights. Matheus beat Manel Kape, Tim Elliott and David Dvořák. As previously mentioned, he is very close to breaking into the Top 5. A win on Saturday will ensure a better-ranked opponent for him.

With an accuracy rate of 44%, Schnell averages 0.68 takedowns per fight. However, he makes the most of it whenever the bout hits the ground and attempts 1.2 submissions per fight. But, the 32-year-old does have a tendency of getting into brawls as he lands 4.34 strikes and absorbs 4.44 strikes per minute. So Matt has striking skills to survive on his feet.

However, his wild striking has also got him into trouble previously, as he has 3 KO losses on his resume. Matheus Nicolau has 1 KO and 1 submission win in his UFC career so far. However, he is much more conservative in comparison with Schnell. Nicolau absorbs only 3.09 strikes per minute while landing 3.64 strikes. The 29-year-old also averages 1.46 takedowns per bout.

While Matt Schnell will try to get an early finish, Nicolau will try to survive the first few minutes. However, both fighters have a history of suffering KO losses. But the momentum is behind Matheus Nicolau, who looks to be the better fighter overall. So Nicolau will be the smart pick for this Saturday.