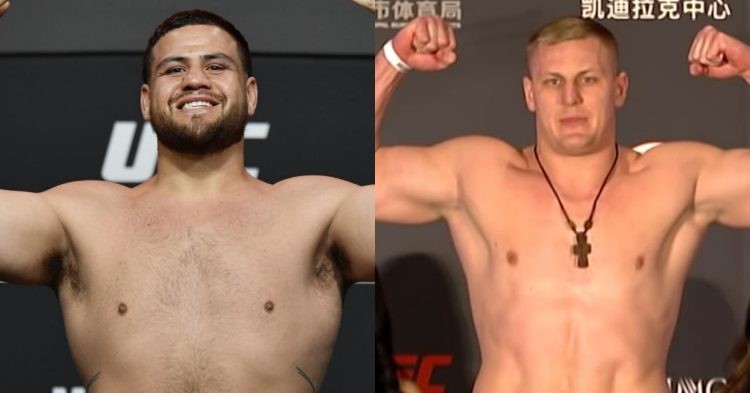 Tai Tuivasa (MMA record 15-4) will be returning to action this weekend. He created history in his last fight, as he main evented the very first UFC card in Paris alongside Ciryl Gane. It was a fight to remember as Tai was moments away from winning the contest and his durability earned a lot of praise. His next opponent is Sergei Pavlovich.

Sergei Pavlovich (MMA record 16-1), since his debut loss against Alistair Overeem, has put up a very impressive win streak. He is currently on a 4-fight win streak, where he beat Marcelo Golm, Maurice Greene, Shamil Abdurakhimov, and Derrick Lewis. The Russian fighter is currently in the 5th position in the heavyweight rankings.

Tai is also in the Top 5, as he occupies the 4th ranking in the division. As per reports, the heavyweight champ Francis Ngannou will face Jon Jones at UFC 285. With not a lot of other viable contenders except Gane, the winner of this bout will have a significant claim at the next title shot. The question is, who can stamp their authority this Saturday? Let’s find out.

Will the winner of Tuivasa vs Pavlovich get a title shot?

Whenever there is a heavyweight contest, fans expect to see two massive punchers battling it out in the middle of the Octagon. That will exactly be the case in this particular fight as well. Tai Tuivasa and Sergey Pavlovich both have 13 knockout wins in their careers each. So fans can be sure about seeing some amazing action between these two on Saturday.

Tai Tuivasa was perhaps just a few crucial seconds away from potentially securing a title shot in September. However, he fell short of the mark after losing to Ciryl Gane. But, fans saw his true power in the fight, as Tuivasa badly hurt Ciryl twice. Even Francis Ngannou could not hurt Gane during their bout at UFC 270. So one can imagine how severe Tai’s power really is.

Pavlovich is a powerful man himself. In his 4-fight win streak, Sergei defeated all of his opponents via TKO. Only 3 of his wins came by the judges’ decision. As per UFC stats, Pavlovich, on average, lands 6.83 strikes per minute. But, he absorbs 4.44 strikes per minute as well. In all of his wins in the UFC, the 30-year-old got rid of his opponents in the first round.

The Australian Tai Tuivasa averages 4.12 strikes per minute and absorbs 4.24 strikes at the same time. Tuivasa has a great chin, which was evident in his last fight. Neither fighter are eager to take their opponents to the ground and their 0.00 takedown average proves that they are not looking to change it anytime soon.

Judging by their last fights, Sergei Pavlovich will definitely have an advantage over Tai Tuivasa. Sergey beat Derrick Lewis without suffering any damage. But, the 29-year-old Tai suffered an obscene amount of punishment in his last fight. So, it may play a role in their bout on December 3rd. Tai is returning to action only after 3 months of rest. Has he healed properly? Fans will find out at UFC Orlando this Saturday.