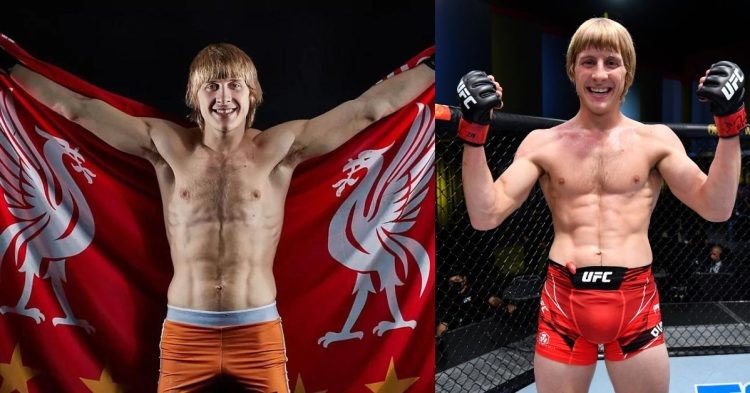 UFC lightweight star Paddy Pimblett has become a popular figure all over the world in a very short time. His hairstyle, mic skills, and fighting style make him a much watchable character. ‘The Baddy’ is being compared to the UFC’s biggest superstar, Conor McGregor, and is expected to reach a height of fame as much as ‘The Notorious’.

Many fans confuse Pimblett to be Irish. However, Paddy is from Liverpool, England, and calls himself proudly a “Scouser”. Like McGregor, Pimblett was also a Cage Warrior lightweight champion and is already a big icon in the UFC.

Pimblett’s nationality is English. He was born and raised in Liverpool. He is already a big star there and is on his way to becoming UFC’s next big superstar. ‘The Baddy’ joined the promotion in 2021 and in such a short time, has fought three times and won all of the bouts via stoppages.

Pimblett’s influence is creating positive impacts worldwide. He is a speaker on men’s mental health and gave an emotional speech that went viral. Pimblett also has a foundation named ‘The Baddy Foundation’ which helps poor communities, provides food, and helps people with mental issues.

Paddy Pimblett was born on March 1, 1995, and is from the Huyton area of Liverpool in England. Paddy’s actual given name is Patrick Pimblett, and “Paddy” is a common nickname for “Patrick”.

He was born into a large joint working-class family. His father is an entrepreneur and his mother is a housewife, however, none of their names have been revealed. Pimblett also has siblings and grew up alongside his half-brother, Roe, and half-sister, Kirsty.

Pimblett has a fiancé named Laura Gregory, who was his long-term girlfriend. After dating for many years, Pimblett proposed to Laura in 2020. They currently live together and can be often seen posting pictures on social media.

Pimblett went to Cardinal Heenan High School and at the age of 14, he began training in mixed martial arts. As a child, Pimblett was very interested in martial arts. ‘The Baddy’ holds a black belt in Brazilian Jiu-Jitsu and currently trains at Next Generation MMA Liverpool.

One of the reasons he decided to join MMA was because he was very influenced by the infamous fight of Diego Sanchez vs. Clay Guida, which is one of the grittiest fights in the promotion. This can be also noticed in his own fights where he charges his opponents into a brawl.