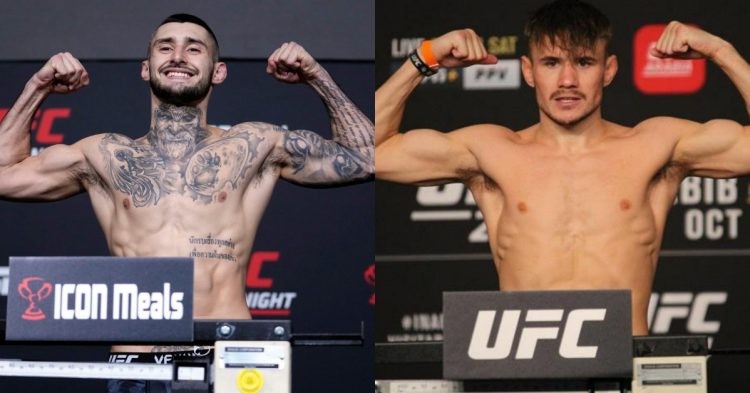 UFC Paris is set to take place on September 3rd inside the Accor Arena in France. The main card is set to kick off with a banger of a fight between Charles Jourdain and Nathaniel Wood. If they both fight to their potential, it is set to be a contender for ‘Fight of the Night.’

Charles Jourdain had an immensely entraining fight against Shane Burgos in his last contest. The bout went the full distance and Burgos got the win via majority decision. But Charles certainly had an argument that he should have gotten the nod as he was the more active fighter in the bout.

Nathaniel Wood is having a quick turnaround as he just fought on July 23rd at UFC London. He defeated Charles Rosa on his featherweight debut. He had a very up and down time in the bantamweight division. But it looks like the elimination of weight cuts has given his fighting career a new boost.

Charles Jourdain has had 9 fights in the UFC so far and currently holds a record of 4-5. He puts on great performances on a regular basis, but Charles has not been able to convert them into positive outcomes. Although Charles has suffered a submission loss, the 26-year-old is yet to be knocked out in his career.

It is certainly impressive given his style of fighting. Charles is an aggressive slugger who lands at a rate of 5.85 strikes per minute while absorbing 4.31 strikes. So he always puts himself in the firing line to get a win. He has 8 KO wins, 4 submission wins and only 1 decision win.

Nathaniel Wood also has a great finishing rate. He has 9 wins via knockout, 5 via submission and 1 by decision. So far in the UFC, Wood has a record of 5-2. So he has certainly done well for himself. But he has made grappling his primary tool in the UFC as he has 3 submission wins already in the promotion.

But he does not shy away from engaging in brawls either. He has an extremely high output rate of 6.32 strikes per minute. He also has a takedown average of 1.24 per fight. Although the numbers suggest that Wood should be the favourite to win, he will have a significant height disadvantage.

Both are high-octane fighters who do not really focus on defence much. So the bout should be entertaining. Although the momentum is on Wood’s side, the fact that it is only his second featherweight fight is certainly a cause for concern. So Charles Jourdain will be the smart pick to win this Saturday, but not by much.