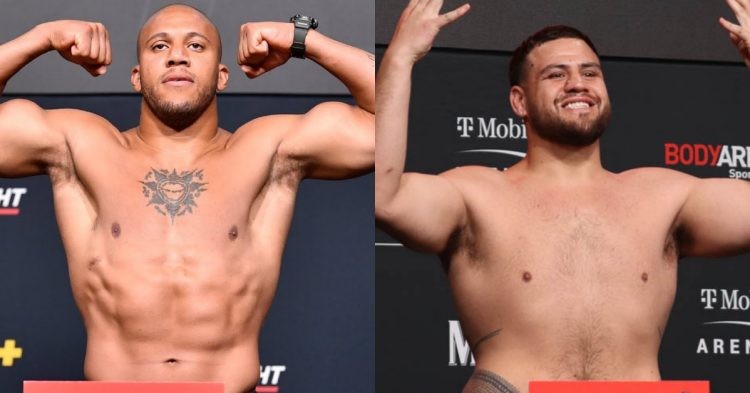 UFC is set to create history on September 3rd as they will hold their first event in France. Although the country has seen fighters like Francis Ngannou and Ciryl Gane come through the ranks, MMA was not legal there until very recently. Hence this weekend’s UFC Paris will be one for the ages and it features Gane and Tai Tuivasa in the main event.

Ciryl Gane is coming off the very first loss of his professional career. Ahead of UFC 270 in January, he was undefeated and was the favourite to beat the champ Ngannou. However, Gane was not prepared for Francis’ wrestling and paid the price. His elite striking was completely shut down by The Predator’s wrestling. However, that will not be the case this Saturday.

Much like Bon Gamin, Tai is also a striker. But what differentiates him and Ciryl, is his approach toward fighting. Unlike the Frenchman, Tai loves to get into brawls. In his last fight, the Aussie knocked out Derrick Lewis in an entertaining slugfest. Although he was rocked a few times, Tai maintained his composure and landed the killer blow in the second round.

Tai Tuivasa has 15 wins in his career and 13 of those wins came via KO/TKO. He is currently on a 5-fight win streak and he finished all those opponents inside 2 rounds. Tuivasa has wins over the aforementioned Lewis, Augusto Sakai and the former UFC heavyweight champion Andrei Arlovski.

After losing 3 successive fights, Tuivasa bounced back in a spectacular way and is ranked 3rd in the division. The 29-year-old lands 4.54 strikes per minute which is a very high output for a heavyweight fighter. Although Tai absorbs 3.56 strikes per minute, Tuivasa only has one KO loss in his career. So it is obvious that Tai has a great chin.

His opponent on Saturday and the no. 1 ranked heavyweight fighter, Ciryl Gane’s striking stats are amazing. ‘Bon Gamin’ only absorbs 2.27 strikes per minute, while landing 4.83 in the same period. Unlike Tuivasa, Gane also mixes up takedowns as well. He has an average of 0.69 takedowns per fight with an accuracy rate of 22%.

So it is evident that Gane has more tools at his disposal. One stat that the fans will have to keep in mind is that Gane has a striking defence of 62%, whereas Tuivasa’s defence stands at 48%. So the fans can anticipate who may have more success in landing strikes in the fight.

Gane also has the height and reach advantage over Tai. So he will look to keep his distance and invite Tai to take the lead. But it will be a mistake for Tuivasa to do so as Gane is fantastic at finding a way through an opponent’s guard. Ciryl also can use his grappling if he needs to. So Gane will be the smart pick to win against Tuivasa on Saturday.