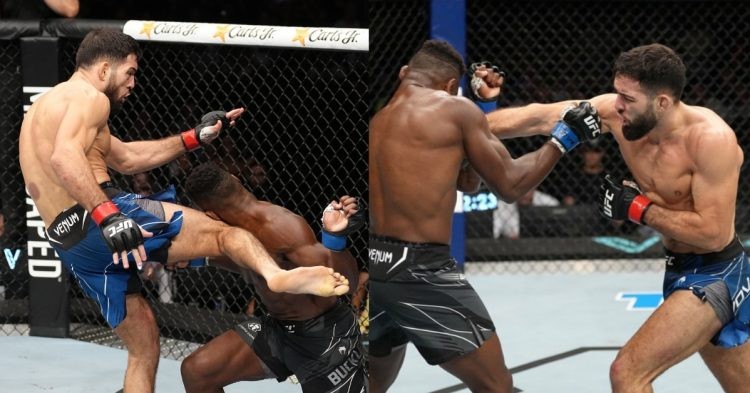 The highly anticipated UFC Fight Night: Gane vs Tuivasa featured a mouthwatering clash between Nassourdine Imamov and Joaquin Buckley that took place on the main card at the Accor Arena in Paris, France.

It is needless to say that fight fans were highly excited and were expecting fireworks from this middleweight matchup as both fighters are extremely aggressive.

Imamov who is ranked #12 in the division stepped inside the octagon on the back of two impressive knockout finishes to his name. On the other hand, his opponent Joaquin was in terrific form and was looking to get his fourth successive win and enter the top 15 of the 185-pound division.

The fight started at a high pace with Buckley trying to close the distance with his speed. On the other hand, Nassourdine kept his distance and was countering Joaquin with some good shots. Joaquin Buckley attempted a few takedowns but Imamov showed great takedown defense.

During one of the exchanges, Nassourdine landed a beautiful front kick and ended the round on top with a good takedown. In the second round, Imamov established his superiority over Buckley as he controlled the pace of the fight and took him down for the second time.

Nassourdine inflicted a lot of damage after taking the back of Joaquin with some good ground and pound shots and almost finished New Mansa with a rear naked choke. However, Buckley managed to escape from the submission attempts and survive the second round.

After getting dominated for the majority of two rounds, Joaquin Buckley came out all guns blazing and tried to get the finish in the final round. He landed several good combinations of strikes and stunned Nassourdine several times.

However, Imamov’s great durability helped him to eat many of Buckley’s shots and the fight went to the distance. Subsequently, all three judges scored the fight in favour of Nassourdine Imamov and he won the fight via unanimous decision.

With this win, Nassourdine has extended his streak to three straight wins and it is needless to say that he has made a statement and would most likely get into the top ten of the middleweight division.