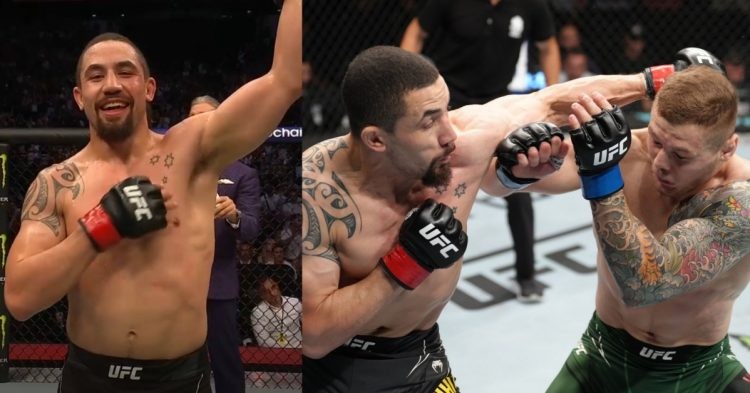 Elite middleweight fighters, Robert Whittaker and Marvin Vettori were in action at UFC Paris. No. 1 ranked 185lbs fighter Whittaker took on Vettori, who occupied the 2nd rank in the division heading into the event.

Nicknamed The Reaper, Robert Whittaker lost to Israel Adesanya in his last fight at UFC 271. However, it was a great performance which saw Rob giving him the hardest title defence of Izzy’s run yet.  It was so good that some even thought Whittaker was the rightful winner, including the Aussie himself.

Our CAN’T MISS Co-Main is up NOW! TUNE IN!@RobWhittakerMMA vs @MarvinVettori

On the other hand, Marvin Vettori aka The Italian Dream defeated Paulo Costa in his last fight. Although Costa was horribly out of shape for the fight, Vettori earned a great win regardless. So both Robert and Marvin were in great form ahead of the fight. So how did it play out? Let’s find out.

Although the fans have seen non-title UFC co-main events being 5 rounds, this was not the case for this fight. Both seemed intense and raring to go during their walkouts.  It was Whittaker who started off the proceedings with a calf kick. Rob looked really aggressive in the initial minutes of the fight. Every time Vettori tried to pressure Whittaker towards the fence, Rob got out of the way.

At the fourth minute of the round, Vettori attempted to take Rob down for the first time and the Aussie displayed elite takedown defence and managed to stay on his feet. His striking, his movement and accuracy, everything looked on point in round 1.

Round 2 started with Whittaker utilizing the front body kick. Although Rob landed the kicks with precision, Marvin tried to answer with some kicks of his own. But the quality between their striking really showed as Vettori was unable to land any meaningful strikes. Not just kicks, Rob’s right hand also got through Marvin’s guard over and over again.

Rob managed to rock Vettori in the second round with a massive head kick. But showing his maturity, Rob did not rush in. Instead, he decided to pick Vettori apart slowly throughout the rest of the round. With potentially two rounds down, Vettori needed to do more in round 3.

The urgency was evident in Marvin’s approach as he started swinging right from the beginning of the final round. But it meant that Vettori was open to being countered and that is exactly what Rob did. Bobby Knuckles found the perfect timing to land a few head kicks that left Vettori bloodied.

But Whittaker never hurried in to finish the fight. He just kept on firing the right hand and kicks repeatedly. To everyone’s surprise, it was Robert who landed the first takedown of the fight with one minute left on the clock. Although Marvin got up, Rob just rag-dolled him in the closing seconds of the fight.

The judges scored the fight 30-27, 30-27 and 29-28 for the former middleweight champion Robert Whittaker. Following the bout, Rob called for another fight against Israel Adesanya.

Ahead of the fight, Marvin Vettori claimed that he will dominate Robert Whittaker. But his display during the fight was not pleasant to the eyes. Not only did he fail to take Rob down, but Whittaker also battered him throughout the duration of the fight. It made fans criticize Vettori online.

Vettori at the end of the fight: pic.twitter.com/X31QZcNiTO

After the fight, Marvin Vettori addressed the Italian fans present in the crowd and seemingly apologized for his performance on the night.