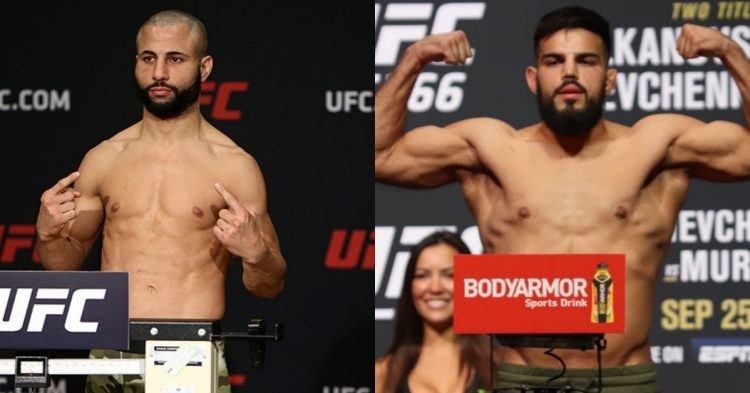 John Makdessi vs Nasrat Haqparast goes down this weekend at UFC Paris. The lightweight bout is set for 3 rounds and it will take place on the main card of the event. While Nasrat has lost both of his last two fights, Makdessi has won 4 of his last 5 fights in the UFC.

Nasrat Haqparast made his UFC debut in October of 2017. He took on Marcin Held in his first UFC fight and lost the contest via unanimous decision. In total, Nasrat has had 9 fights in the company with a record of 5-4. So it will not be a stretch to call it a disappointment.

Nicknamed The Bull, John Makdessi came into the UFC in 2010. His very first fight was against Pat Audinwood at UFC 124. The 37-year-old is still going strong and is coming off a win against Ignacio Bahamondes. He currently holds a UFC record of 11-7. Although it is not the most spectacular record, John’s longevity has to be lauded.

John Makdessi has 9 knockout wins in his career and 9 wins via decision. He is not the kind of fighter who comes to take his opponent down and grind out a decision win. Even at this age, he is regularly putting up entertaining fights.

The Canadian fighter lands an average of 5.57 strikes per minute with an accuracy rate of 51%. John also has a takedown defence of 89%. On the other hand, Haqparast lands at a rate of 5.17 strikes per minute. So both fighters are at a similar level in terms of striking. But what differentiates them, is their grappling abilities.

While John has a takedown average of a staggering 0%, Nasrat averages 0.13 takedowns per fight. Although it may not be much, it may provide an interesting wrinkle to the fight. Similar to John, Nasrat is yet to register a submission win, but he is skilled enough to keep his opponent on the ground.

Both are incredibly well matched and it is really hard to predict which way the bout may go. But Nasrat may just be the safe bate this weekend as he is the younger fighter and is going up against someone who compliments his style of fighting.