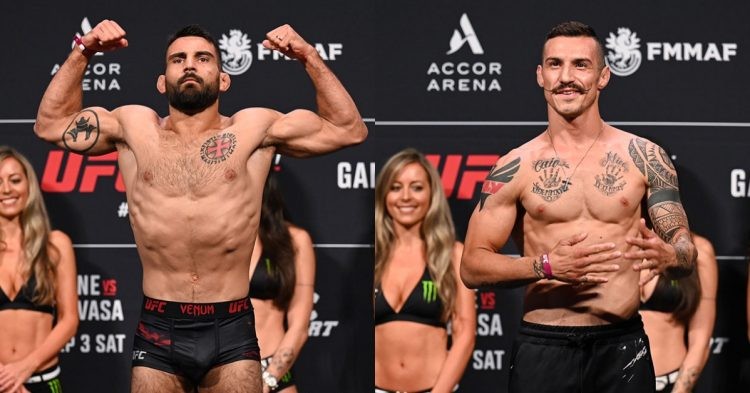 The highly anticipated UFC Fight Night: Gane vs Tuivasa will take place on September 3rd at the Accord Arena in France. This UFC Paris event features several exciting bouts throughout the proceedings that will keep the viewers entertained.

Lightweight prospect Benoit Saint-Denis will be in action as he will square off against debutant Gabriel Miranda in a three-round lightweight bout scheduled in the prelims of the event. Leading into this matchup, God of War picked up his first UFC win as he submitted Niklas Stolze in the second round in June earlier this year.

On the other hand, Miranda who is making his UFC debut has accepted this fight on short notice after Saint-Denis’ initial opponent Christos Goagos had to pull out after injuring his finger. As we move ahead let’s compare the stats of these two lightweights that will clash at UFC Paris.

Despite suffering a brutal beatdown in his UFC debut, Benoit Saint-Denis showed tremendous heart and grit to survive the three rounds. In his next fight, God of War picked himself up and earned a resounding submission win. To grab the headlines in the stacked 155-pound division, Saint-Denis needs to rack up wins and go on a rampage.

Although it will be very difficult to control the French lightweight on the ground as he has good takedown defense. In a striking battle, Benoit has shown that he is very durable and can land powerful shots with good accuracy. On the other hand, Miranda’s chin has not been tested and it would be interesting to see how he fares in the standup.

With that being said, Benoit Saint-Denis has a small advantage in both departments and one can expect the Frenchman to get his hands raised by the referee at UFC Fight Night: Tuivasa vs Gane.