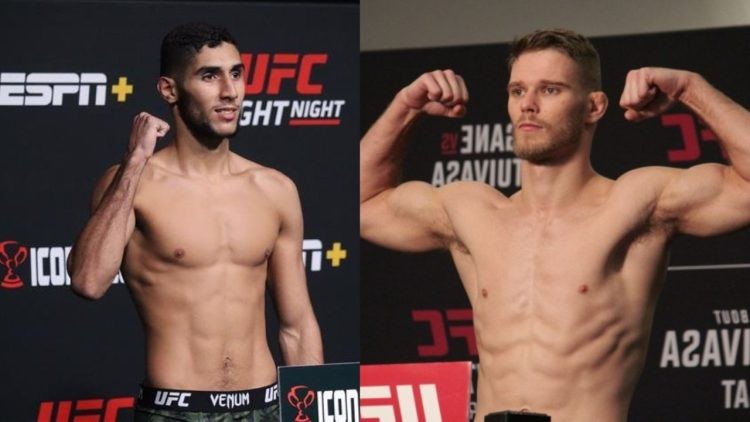 Much credit to Michal Figlak, who makes his UFC debut against Fares Ziam this weekend at the Accor Arena, Paris. Needless to say, there’s a lot at stake for both Ziam and Figlak, both of whom have a lot to prove going into this fight at UFC Fight Night in Paris.

This card features a mouthwatering heavyweight clash between Ciryl Gane and Tai Tuivasa that will take place at the main event. Apart from this big heavyweight matchup, there are several exciting bouts on the card that fans should watch out for.

155ers step up to the task as @ZiamFares goes head-to-head with @FiglakMichal! 👊

Ahead of this exciting match-up between two up-and-coming talents in the UFC’s lightweight division, let’s try to predict the result of Fares Ziam vs. Michal Figlak.

Fares Ziam does not have the best record in the  Octagon

Coming into the fight Fares has an advantage in experience and reach. Be that as it may, he’s just not quite the striker you would expect him to be after listening to him trash-talk. While the back and forth inside the cage definitely grab eyeballs, Ziam is not a pressure fighter.

While there’s no denying Fares’ skillset, every time he has squared off against a difficult opponent, he has lacked the tenacity to finish the fight. Even though the Frenchman has a record of 2-2 in the Octagon and an extensive kickboxing background, he is still the underdog for this fight.

Talking about our debutant and favourite for the fight, we have Michal Figlak. Fresh off a successful stint at Cage Warriors, the Englishman is an unknown quantity for the most part. Form-wise, Figlak has won three unanimous decisions over Kieran Lister (2021), Steve McIntosh (2021), and Agy Sardari back in July.

While we haven’t seen much of Michal Figlak inside the Octagon, from what we know about him from his kickboxing career, he sure as hell knows how to put on a show. Moreover, with the kind of power he carries in his hands, it’s hard not to expect a knockout win every time he’ll step inside the UFC Octagon.

Additionally, we have seen Fares struggle against pressure in the past. Although Fares wishes to win by knockout, he will have to do his best to maintain his distance and out-point Figlak. However, if Figlak closes in the distance and capitalizes on it, he could very easily get his hand raised in the Octagon for the first time.