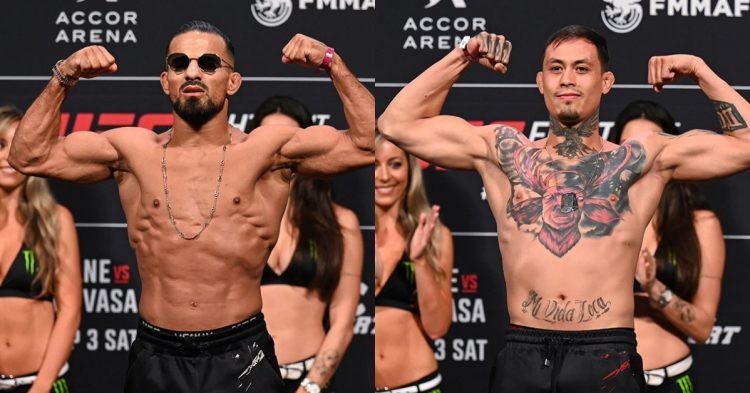 UFC is back this weekend on September 3rd with several exciting fights that will take place at the Accor Arena in Paris, France. Bantamweight contender Khalid Taha will step inside the octagon after a lengthy one-year layoff to take on Cristian Quinonez in a three-round matchup that is scheduled in the prelims of UFC Paris.

This matchup is a do-or-die situation for Taha given that he has only managed to win once in his five fights in the UFC. Whereas his opponent Cristian Quinonez had a great outing in the DWCS through which he earned a UFC contract.

Problema outclassed Xiao Long with his striking skills and secured a unanimous decision. It is needless to say that he will look to emulate his previous performance against a struggling Khalid Taha. As we move ahead, let’s compare the stats of the two bantamweights that will clash at UFC Paris: Gane vs Tuivasa.

Khalid Taha has not been able to deliver on the expectations set by fans and has underperformed a lot. It is needless to say that the German bantamweight will be under a lot of pressure after failing to win a single fight in his last three matchups.

Fans can expect a striking battle as both the bantamweights like to stand and bang. However, going into this fight, he will be at a big disadvantage given his opponent Cristian Quinonez has the height and reach benefit. Moreover, Quinonez is much more skilled when it comes to striking as he has higher striking output and accuracy than Taha.

The key to Khalid Taha winning this fight will be to find the correct moments to land a big blow and try to finish the fight by a knockout. In the past, trying to approach the fight with this strategy has not helped him, but being aggressive from the get-go and closing the distance will help him gain an upper hand.

However, one can expect Cristian Quinonez to be wary of Khalid’s knockout threat and keep a safe distance and strike throughout the entirety of the matchup.