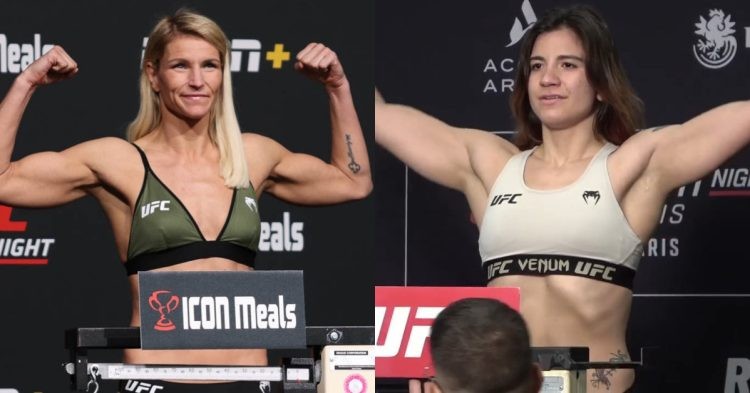 UFC Paris is all set to go down this weekend on September 3rd at the Accord Arena in France. This card features a mouthwatering heavyweight clash between Ciryl Gane and Tai Tuivasa that will take place at the main event. Apart from this big heavyweight matchup, there are several exciting bouts on the card that fans should watch out for.

One such fight is the three-round women’s featherweight matchup between Stephanie Egger and Ailin Perez that is scheduled to take place in the prelims of the UFC Paris event. Leading into this bout, Egger suffered her first UFC loss as she was submitted by Mayra Bueno Silva early in the first round.

Following this defeat, Stephanie is making her return inside the octagon in less than a month’s time and she is clashing against debutant Perez. As we move ahead let’s compare the stats of the two women’s featherweights that will square off against each other at UFC Fight Night: Gane vs Tuivasa.

Stephanie Egger had a great start to her UFC career with two back-to-back finishes to her name. From her recent performances, it is needless to say that the 34-year-old featherweight fighter has good potential to rise through the ranks and contend for the title.

Speaking about this matchup, fans can expect a barn burner given their aggressive fighting styles. Ailin Perez who is making her debut has previously fought in different fighting organizations like NFC, CFU, and Samurai Fight House and has grabbed seven wins, out of which she has finished five of her opponents.

However, there is a lot of scrutiny on her record considering five of her eight opponents have a very poor record. Going into this fight, Fiona’s power will be something that Stephanie needs to take care of. Other than that, Egger is more well-rounded and has several tools in her arsenal to get the job done.

Stephanie’s superior grappling skills will give her an edge in this fight and consequently, one can expect her to go for an early takedown and finish the fight as a striking battle could prove fatal given her opponent’s superior power.

In the end, if Egger manages to fight smart and not engage in any meaningless striking exchanges, then the likelihood of her winning the fight with her skills and experience increases significantly.